The Hlädiné (Pleasure) potency, the Personification of Love, All Beautiful, All pleasure giving, nectar of the nectar, the very life airs of Çré Kåñëa is Çrématé Rädhä. 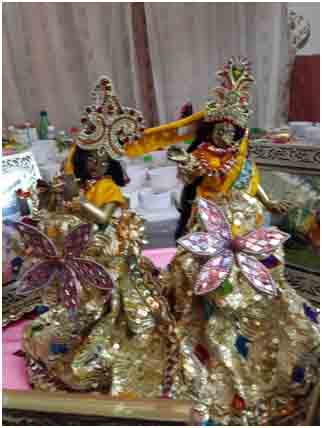 Çrématé Rädhä is the Love personified of the All Opulent, All Beautiful, Çré Kåñëa. She is non-different from Çré Kåñëa..

How we perceive someone, the vision, the eyes, indicates the depth of the knowledge and wisdom one has.
Çrématé Rädhikä’s birth, form, activities is beyond the perception of humanistic thinking, beyond the scope of the human intelligence.

For the divine pastimes of the Lord, She appeared on the eighth day of the Bhadra month. For Gauòéya Vaiñëavas, Çré Rädhä is their Queen, their Worshipable Lord, therefore Her Appearance Day has to be very special, yet inconceivable.

KARM keeps the spirit ongoing with Celebration after Celebrations and Celebrated This Maha-occasion based on scriptural injunctions. 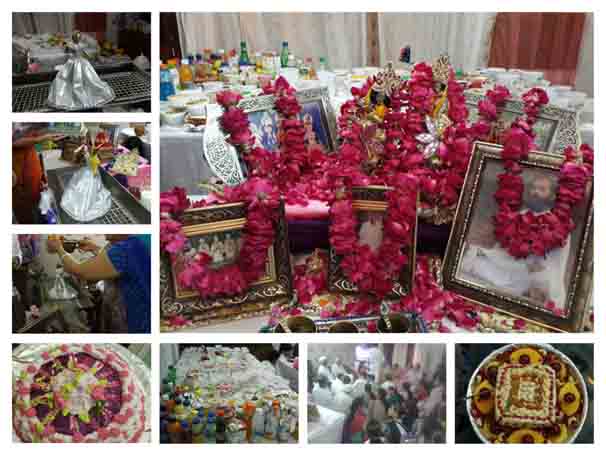 Nothing comes as a barrier whether situation, place or person as the will of the Lord was to be accomplished.
From among various choices, rose the theme of purple, pink, white.

On the Decoration Day, devotees came together to beautify the place,
where the celebrations of Rädhäräné’s JanamDivas had to take place.

Eager devotees had asked long before for the service of Prasädam on the day of decor.
Some devotees began to put curtains, some began putting nets for the pleasure of Their Lord.

Flowers, leaves, pearls…all had come together to adorn,
The sparkles of silver and laces of crystals…scintillating patterns to raise the festive fervour. 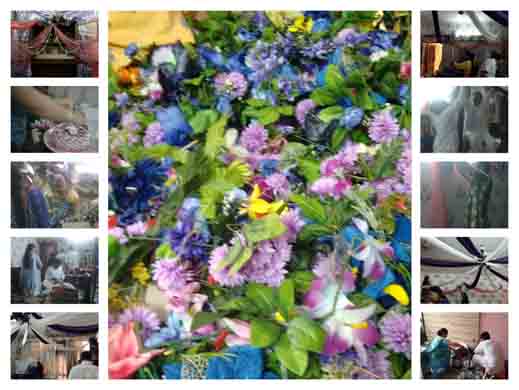 As all concluded the decorative services, they went to their homes for further preparations.

On the day of Our Içvaré’s Appearance, the eager devotees started coming from the various parts of Delhi,
And the table of 56 bhoga saw number of bowls increasing, so as to touch the edge and make a pyramid.

Every care was taken to serve our Beautiful Deities,
The food court assembled to display various cuisines.
From South Indian to continental along with sweets, cookies, drinks and digestives,
the variety personified, in ovation, seemed to be standing. 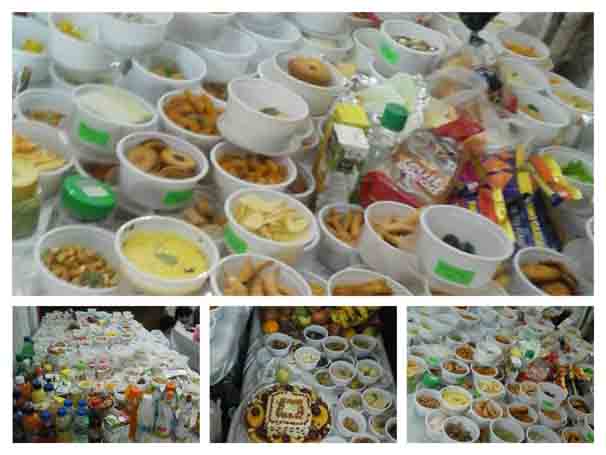 Then as the Special Soul awaited arrived,
with Kértana of Rädhe-Çyäma begun our programme. 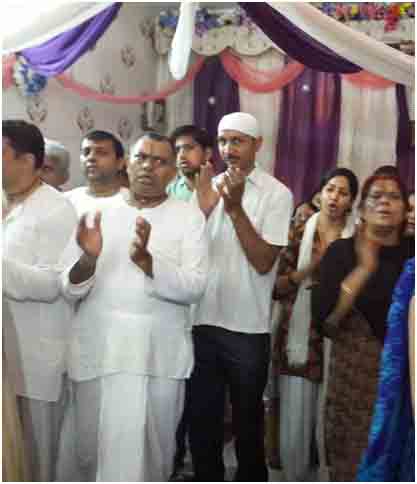 Then, begun Çré Rädhikä’s Abhiçeka, i.e., the Royal Bathing,
Deity of Kåñëa is not bathed as He is just gazing.
the beauty of His beloved for Whom He arrived
all the way from Nandgaon to Barsänä with His closest friends and family. 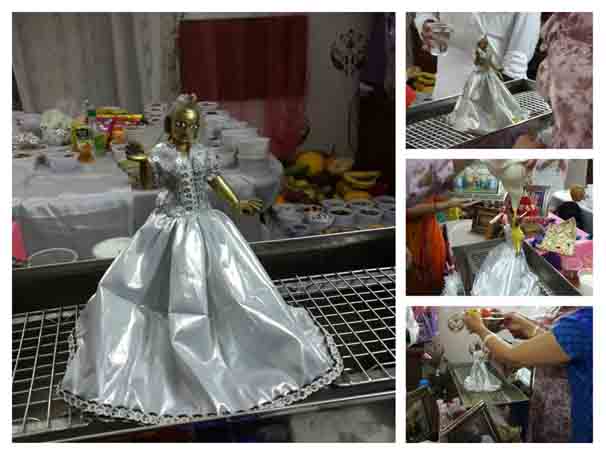 The Devotees did Abhiçeka as they meditated on their own Guru given spiritual form as Çré Rädhikä’s dear maïjaré. One devotee served the rest with various ingredients of Abhiçeka with love and care. As the divine bathing concluded with fruits and water showers, the sound of kértana grew more than before.

Then Çrématé Rädhikä was taken for Her Çångära leaving Kåñëa and everyone waiting for Her Darçana.
As the narma sakhés brought Her back, Her Darçana made everyone breathe again.
It is only the sevä of Her Sväminé (Lord) that keeps the maïjarés breathing for eternity.
Kåñëa is prayed and sung only and only for He is Her beloved.
Not even in dreams, they adore or aspire for His conjugal relationship.

After the Bathing ceremony, when everyone feasted their eyes lovingly and having Darçana of Rädhikä again, the time came
for us to listen and meditate on Her fame.
Everyone’s eyes were beaming to have Darçana of Çré Gurudeva as His Divine Väëé was heard and meditated glorifying Çré Rädhä’s Form and Names.

How to have Her Darçana, How to attain Her Mercy, How Kåñëa gets fixed on Her beauty, to know, to understand, the association of rasika saints holds the key, was all explained.

After the Kaöhä, two cakes, grain and non grain unparalleled in beauty and taste were cut. 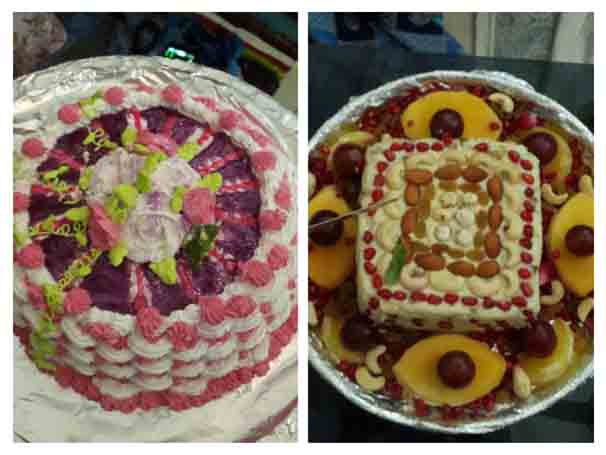 Then began feasting the fast with Prasädam made in various ways, all by the merciful devotees themselves.
And it was not the end, as offerings to Divine and exchange of gifts began,
to please Çré Rupa Gosvami and attain His grace. 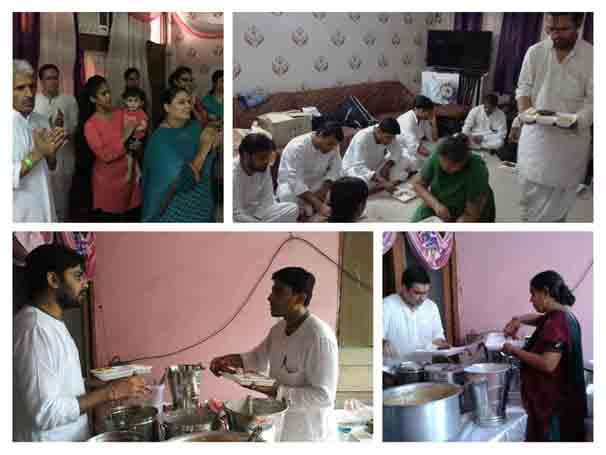 Rädhäräné is like an unsolved mystery for many, understanding Her divine Pastimes is not in the purview of material, human intelligence. It needs great deal of purity but how does that purity come ? It is only through Her mercy in the Form of Çré Guru, Vaiñëavas absorbed with humility and service that anyone can understand and enter the service area of Çrématé Rädhä.