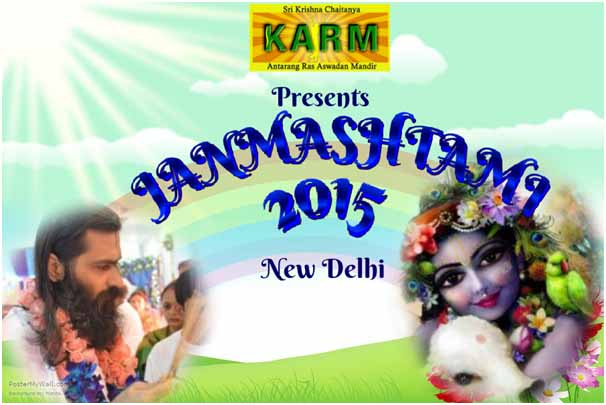 The Supreme Lord is omnipotent, His Pastimes are uncommon. The Love Lord has for jévas is incomparable. His descent on the earth is not just limited to moral reasons but has multifarious reasons.

In the moonless night of the açtamé of Bhadra Mäsa, appeared the Lord of the Lords, the sole subject of the Vedas, for Whom Lakñméjé is performing austerities, the Lover of the Gopés, the beggar unto the feet of Çré Rädhä’s maidservants, maïjarés, the opulence personified, all Glorious Çré Kåñëa.

He who resides in Vrëdävana Dhäma,
With the Gopés, He performs vivid Räsa..
Sweetly He plays the flute,
Lovingly He herds the cows..
He is Rädhä’s Präëanäöha,
He is the Happiness Personified- Lord Kåñëa.

The Appearance Day of the Lord of the Lords, Rädhä’s Präëanätha Çré Kåñëa known as Janmäñöamé is celebrated with immense vigour in almost every part of the world by His Devotees. 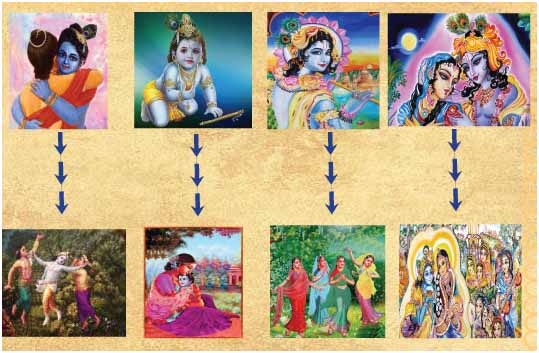 The Gauòéyas, who are devoted to the Lotus Feet of Çré Rädhä, Çré Kåñëa’s pleasure potency personified celebrate Janmäñöamé in a very beautiful way, philosophically enriched and inspired with scriptural essence. The Real Teachings on how Gauòéya Vaiñëavas (the followers of Lord Gauräìga Mahäprabhu and the Six Gosvämés) celebrate Janmäñöamé, as well as the Environment to practise them are being given to all Devotees under Çré Gurudeva’s Shelter at KARM from the beginning itself. Thus enabling the devotees to practise and relish the authentic way of devotion as is prescribed by the Gauòéya Äcäryas, the real authorities.

A Devotee’s heart rose poetic on the Janmäñöamé Celebration as :

Once it was rose, once the peacock feather..
Every year, a new theme adds to adorn the Occasion.. 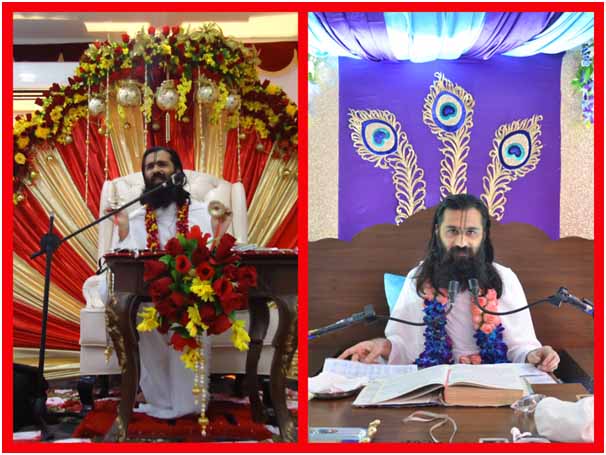 A day before, Devotees gather..
To decorate the Venue, altogether..

While the previous day is spent in grand decoration..
Night goes in arranging & cooking Bhoga for the Lord’s Pleasure.. 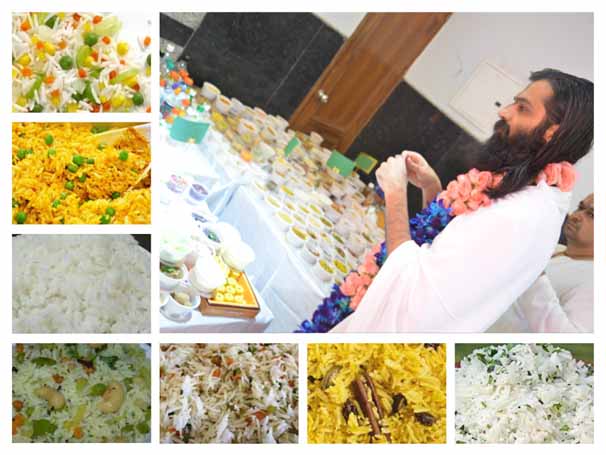 Early morning, Devotees arrive..
To make Rangoli for the Divine..

With Çré Gurudeva’s Entrance..
begins all the gala celebrations.. 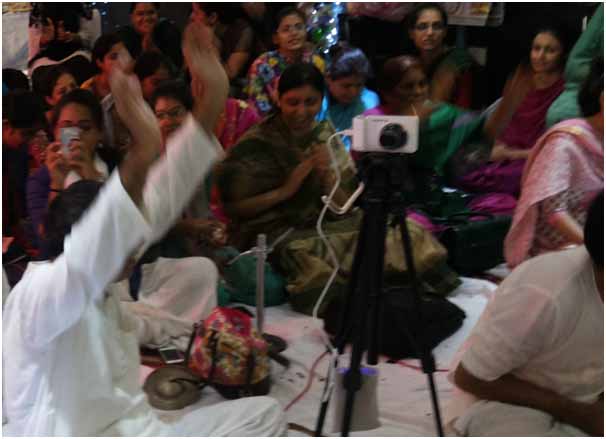 While the Såëgära of Çré Kåñëa is being done,
With musical instruments and the sounds of claps
are sung,
the glories of Kåñëa
in different so many ways..
spreading transcendental vibrations in all directions.

Then, Plays are performed by Devotees..
Delivering message on Divine Loving Teachings..

Then arrives the Moment Awaited,
when Gurudeva’s Mahäväëé will be elating
The Devotees’ hearts eagerly awaiting
So that their ears touch the Voice,
more cooling than a thousand moons shine,
most purifying as Lord’s Sight.
The kértana resounding in the air transports everyone in the Vraja.

As everyone consumes the nectarine Kaöhä through their ears, not even blinking of the eyes is tolerated to disrupt the Darçana.
For years and years to come, the nectar increases manifolds
As one hears It again,
and is hence transferred to a transcendental plane.

Not just through eyes and ears, the mercy of Lord showers in various other ways.
Such as The Cakes !!!

After the Änanda Kaöhä, cutting of beautifully decorated cakes takes place, made in ann as well as non-ann way,
It Is Mercifully done by our Çré Gurudeva..

Devotees render their Thankfulness in the form of offerings to Çré Gurudeva.

Then the sumptuous variety prasäda served in a most exalted way,
turns fasting into feasting in a grand way.

with the Exchange of Love and Gifts among devotees…

And as the time comes to depart, everyone just doesn’t want to leave. Physically the hands are laden with gifts, and spiritually the hearts drown deep into bliss.

This year, the All-Auspicious Day of Janmäñöamé was celebrated on September 6, the preparations for which started about a month before. Colour theme, Decoration, Play ideas were the topics of discussions among all the devotees. Eventually, Red, Pink and white colour with temple theme was finalised for the Occasion.

Even before the Venue was finalised, messages of Devotees began coming to ask for Cooking of Prasädam for all on the Decoration day. Not just for lunch and dinner Prasädam for which the devotees had started asking a month before, Devotees had even asked most humbly for Cooking Evening Snacks, and there were Devotees who begged for the opportunity to serve drinks during the whole day.

On 5th September, Devotees started gathering at the Venue in the morning, to decorate the place, for the Pleasure of Çré Guru and Gauräìga. While few Matajis went for washing the utensils to be used for cooking the next day, others began to decorate Tables for the Deities Altar, Abhiçeka, 56-Bhoga etc. Prabhujis took nails and hammer and began to give Temple look to the Backdrop, even before the arrival of the florists. 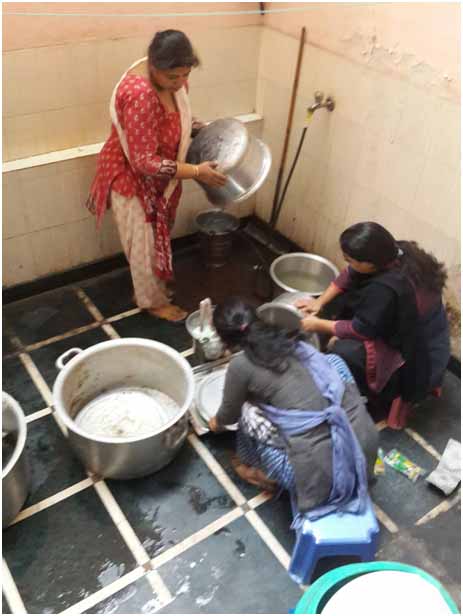 Though the festival was on the next day, feasting began from that day itself, with sumptuous prasäda lovingly made by the Devotees including, chole-kulche, Raita-rice, chapatis, Rajma- rice , drinks , sweets etc. Night arrived, Devotees began to depart for their homes, not to take rest but to begin preparations for arranging and cooking Bhoga for the Lord. 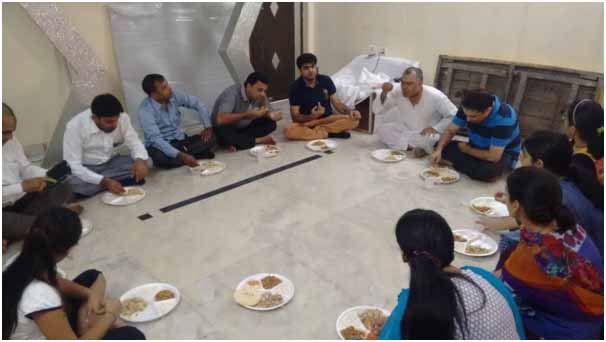 Next Morning, Devotees began to pour in from early morning, all enthusiastic and waiting eagerly for Çré Gurudeva’s Darçana. Rangoli was being made, final touches to the Decoration were being given etc.

Sharp 11 am the Awaited Moment arrived, as Çré Gurudeva Entered the Venue amidst Kåñëa Kåñëa Kértana. Celebrations began with the Abhiçeka of The Deity of Lord Çré Kåñëa by Çré Gurudeva. Then all Devotees were also blessed to perform the same. This was followed by Presentation on ‘how Janmäñöamé is Celebrated in Nitya Vraja and Nitya Navadvipa Dhäma’. 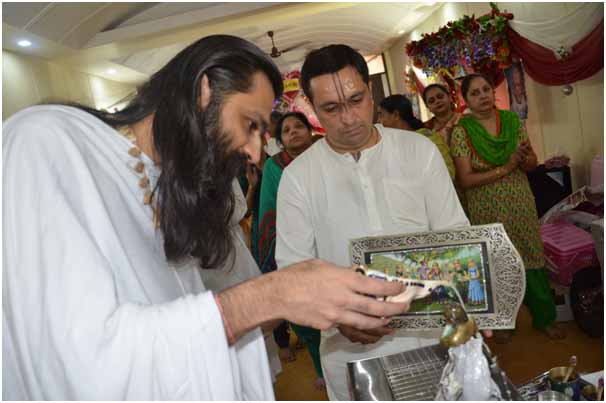 Thereafter, the Ras-filled play was performed by the Devotees on – ‘Kåñëa of Maïjarés’, in which the Eternal Pastimes were enacted to show the glorious position of Maïjarés, leaving everybody delighted and enlightened. 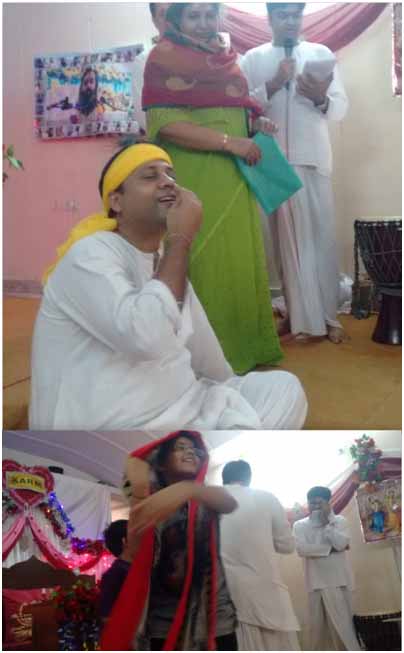 After that, The Deity of the Lord Kåñëa arrived, adorned in fresh glittering looks after His Såëgära was done. Then the Äraté was performed by Çré Gurudeva. The mere sight of which makes one feel so close to Beloved Çré Yugala. 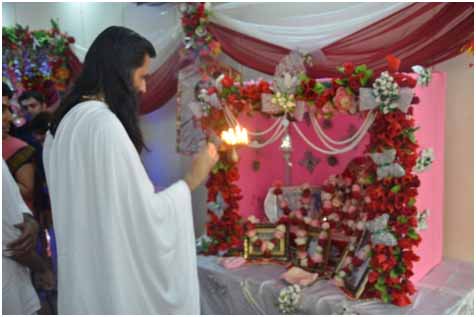 Then Çré Gurudeva lovingly and awe inspiringly began offering the Bhoga meant to be 56, exceeded to 655! 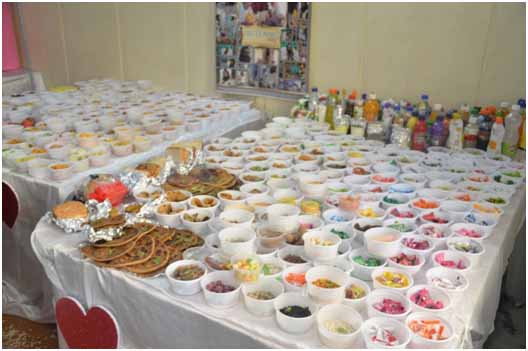 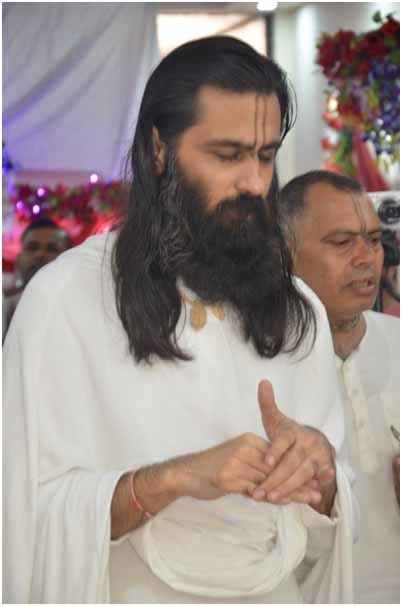 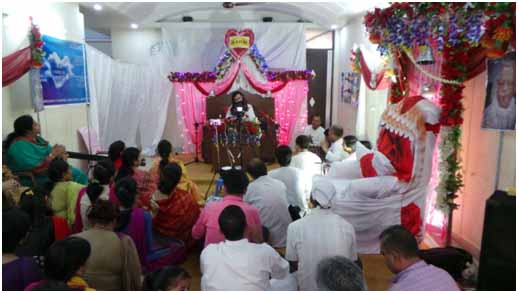 Then, the blissful moment came when Çré Gurudeva blessed all with the very beautiful and enlivening Kértana going straight into everybody’s heart.
Jai Jai Çyämä.
Jai Jai Çyäma..
Jai Jai Çré Våndävana Dhäma..
Devotees could experience hair standing at the end as the kértana resounded in the hall.

Çré Gurudeva further enlightened and enriched Devotees with the Janam Lélä of omnipotent Çré Kåñëa. Towards the blissful concluding of the Hari Kaöhä, the entire surrounding became resonant with the blissful lively Kåñëa..Kåñëa.. Kértana.

Then the cake cutting of beautifully decorated ann as well as non-ann Cake was done by Çré Gurudeva and the Devotees expressed their joy singing Kértana. The feasting extended further as the Devotees served Offerings to Çré Gurudeva and exchanged gifts. The Offerings and gifts ranged from Calendar to Pens, Cookies to Namkeens, spray bottles to wet tissues, Dry fruits to fresh fruits, etc.

Along with the refreshing and chilled Lemonade and Thandai, Sumptuous Prasädam was served in a very nice manner so as to touch the Devotees heart every time it was served.

Truly, the spiritual vividity and relishment in every festival at KARM becomes so spectacular, multiplied with millions as Çré Gurudeva bestows His benign Presence. 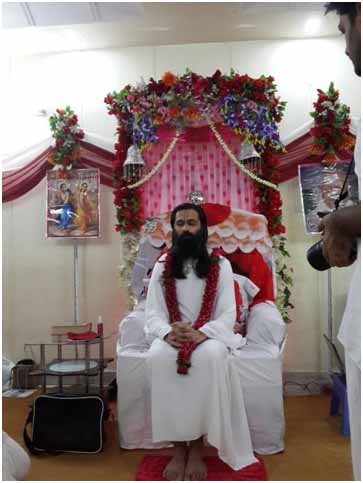 The mercy of the Lord of the hearts extended further as Çré Gurudeva came to deliver After-Lecture Talk in which He elaborated on how to do Bhoga Offering to the Lord. Like every time, Çré Gurudeva also appreciated the Devotees for their Seväs and the readiness towards the service of a devotee was highly mentioned.

Drenching all with Love and everlasting relishment, as Çré Gurudeva departed from the Venue, devotees followed to escort Him. 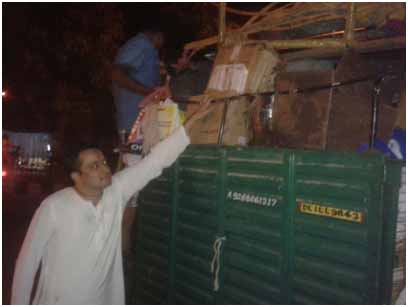 Enthusiastically, devotees volunteered in winding up Seva too.
Devotees went back home with the treasure of Love-filled gifts in their hands, Sumptuous Prasadam in their baskets and Lifetime relishable memories in their hearts.