The most awaited day of the year…

The MOST MERCIFUL day, the very thought of which makes devotees’ hearts vibrate with love and gratitude, that they want to give the best of everything.

The day…rather the very thought of the day makes one enthusiastic and joyous…
The very important day, without which there is no meaning to our existence. The Day is Çré Gurudeva’s Ävirbhäva Divasa- The Appearance Day of our Çré  Gurudeva- Çré Çré Shachinandan Jé Mahäräja.. 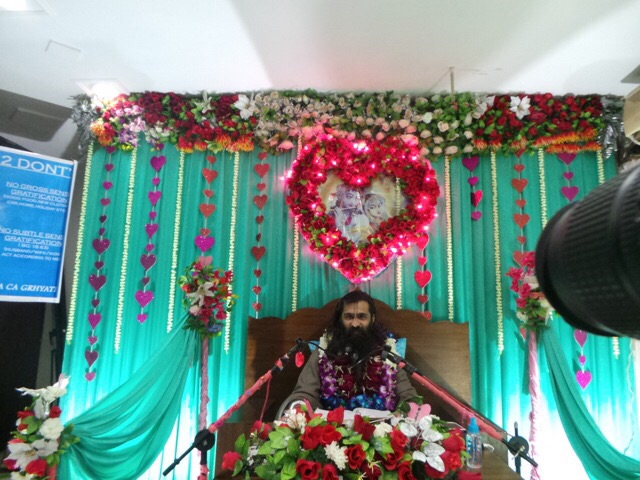 Tithi-wise, this very Auspicious day was celebrated on 11th February, 2015 with full vigour.  Preparations had started months before. The Devotees started looking for the decoration ideas and theme. Devotees searched everywhere and applied their love anointed vision upon everything they saw- weddings, malls etc. to seek the ideas. Devotees pondered upon various themes, as beautiful as one could feel and eventually the thoughts settled on ‘The Heart’, the heart of the Lord Kåñëa, Who is Çrématé Rädhäräné.
Then preparations began with full bloom.

Even before the theme and venue were finalised, messages from Devotees began to come, seeking permission of serving Prasädaà for Devotees on the decoration day. Those who got the opportunity for the Decoration Sevä, prepared elaborate sketches of the decoration of Altar, Vyäsa Äsana, Entrance, Hall etc.. And, thus the making of cut outs by our young Mätäjés started, who put all their hearts in making the hearts for decoration. 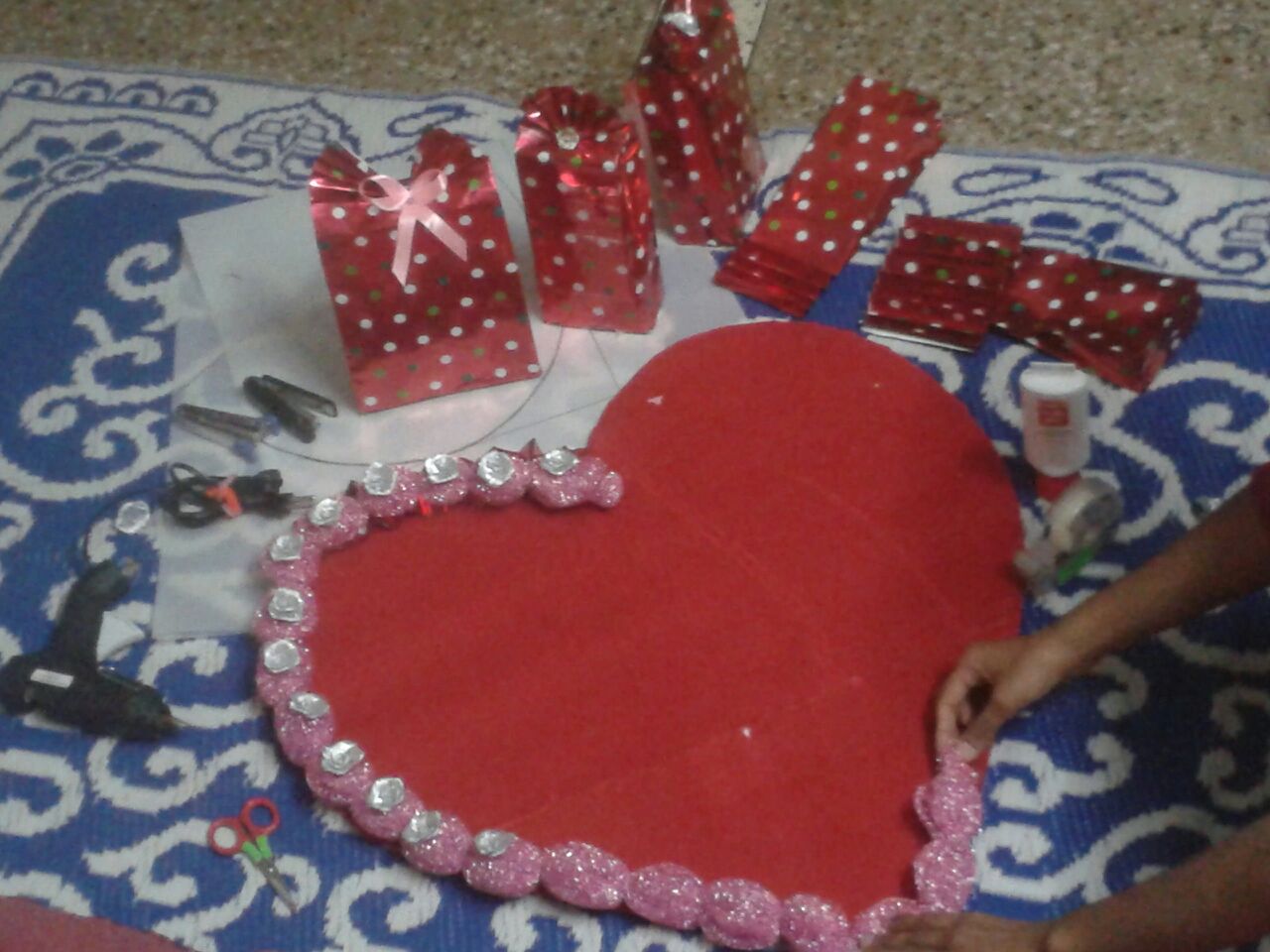 Those who got the opportunity for making cake, searched variegated designs and practised them beforehand. Presentation for the Event was also prepared by Devotees with all their hearts. Simultaneously, the script for the play was being written, practised and re-practised. Deciding for the menu for the Festival, talks with the cook, and arranging for the ingredients was done alongside.

Devotees extended their love filled support every way. There was a devotee who heartily prepared pillars for the use in decoration at his factory, he even brought his factory workers to the venue for final installation.

Truly, It is the festival where everyone is the host, no one is guest. Services from-

-cutting of hearts with different sheets to making strings of hearts;
-making heart shaped wooden bases for the cake to whipping icing cream;
-writing script for the play to meeting at a place for practising dialogues;
-writing and doing audio recording for making the Presentation;
– overseeing the cooks ,making prasädaà.

All the services were rendered very lovingly by all the Devotees from very young age group to old..

The cake making is no cakewalk and goes equally grand way. The loving efforts of the Mätäjés in cake making sevä started 3 days prior to the festival. Initial 2 days were spent in making 9 cake bases at one place and on the third day, the day prior to the programme, icing of the cakes was done. 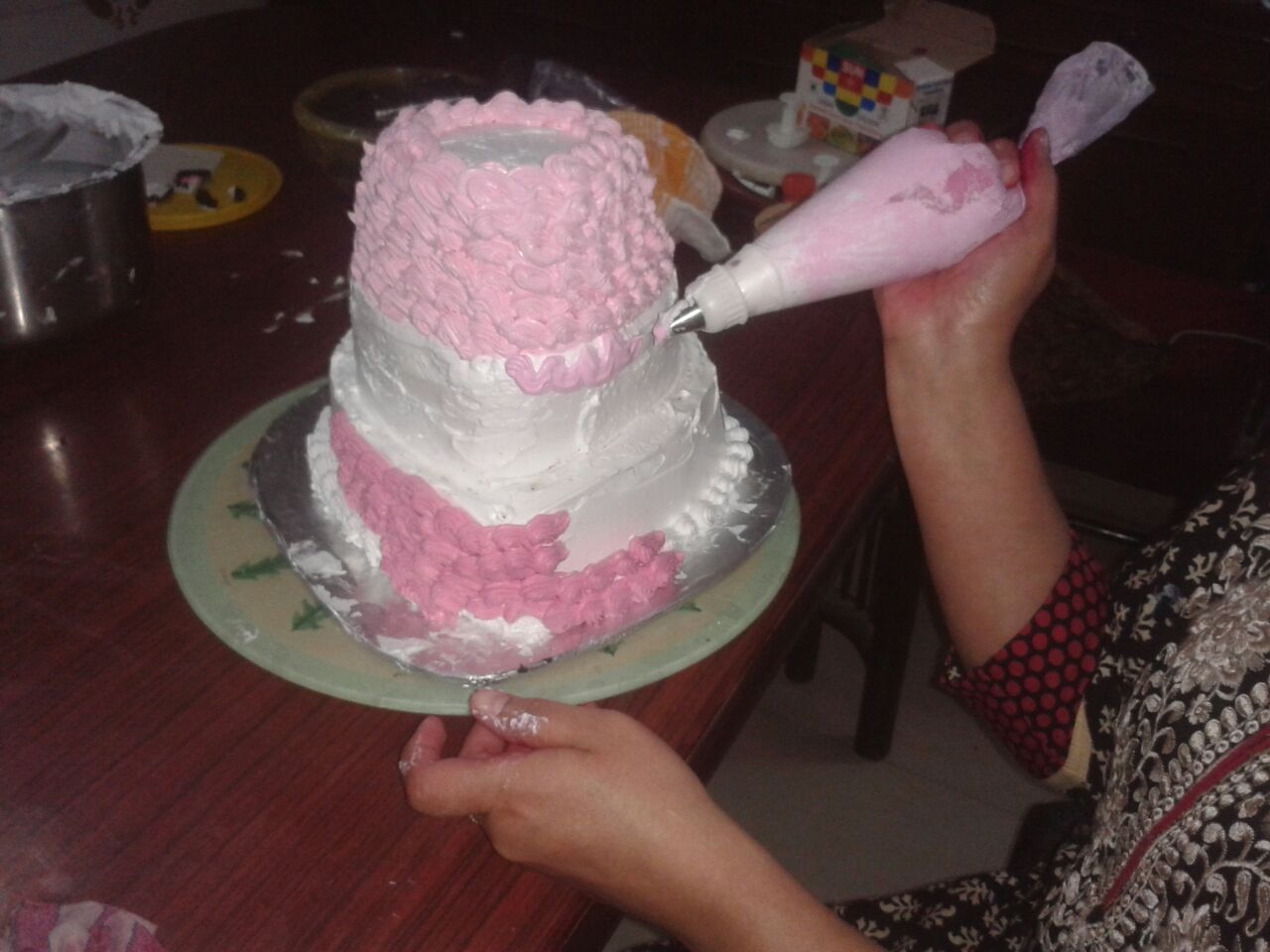 The Decoration Sevä is no one or two day task. The preparation started weeks before, making drafts and collecting sheets. At the Venue, decoration started from 10th February, where Devotees gathered in the morning and stayed till late night, to return again early in the morning on 11th February. The Decoration day gives very special moments for the devotees to intensify the feeling of love and devotion. They come closer as they serve as a unit with the feeling that they are decorating the splendid Kuïja of their beloved Deities. This verily pleases Çré Gurudeva. 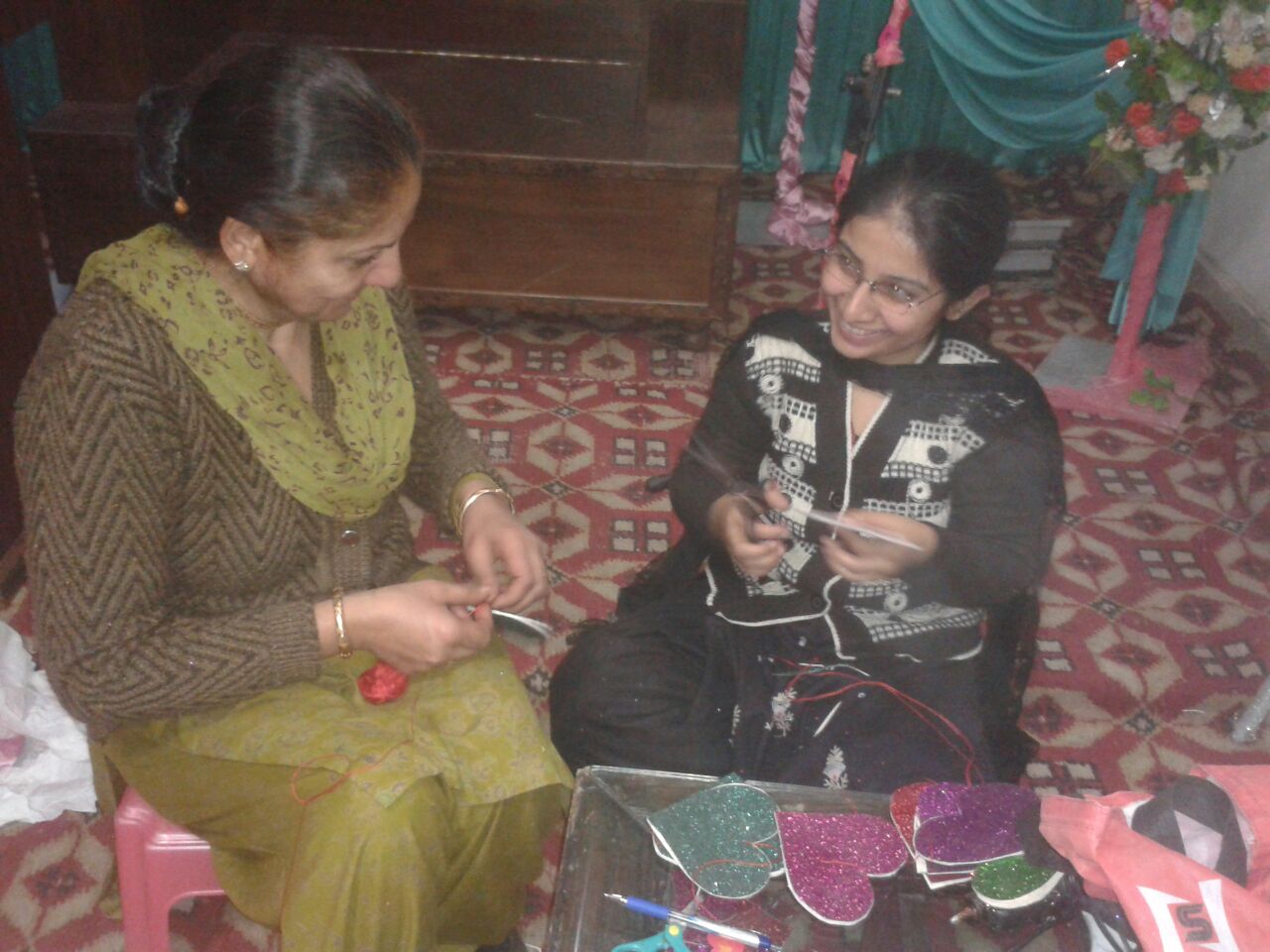 The programme, though scheduled at 12.30pm saw devotees coming from early morning, so that no stone was left unturned in decorating and beautifying the Place. 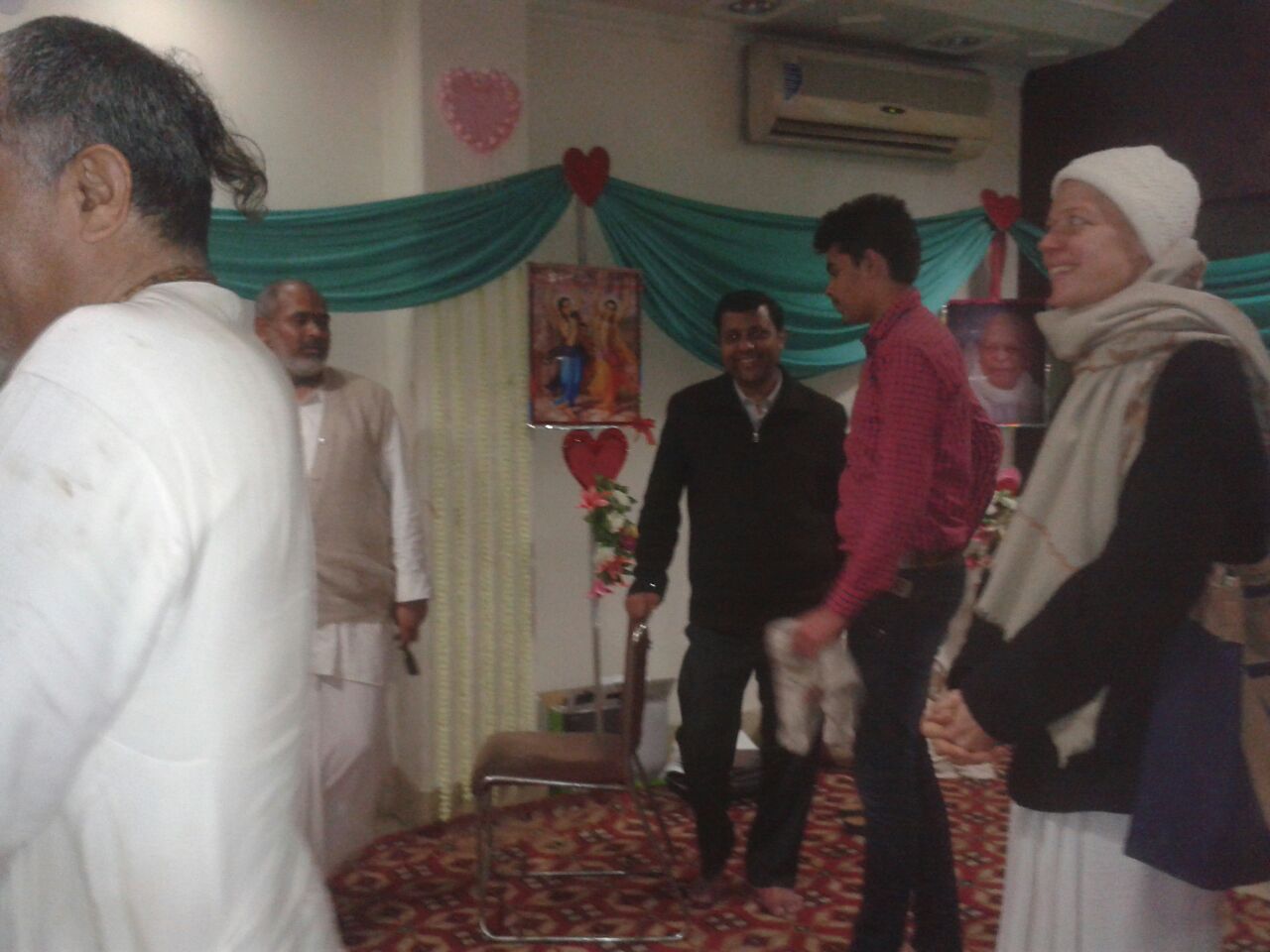 Then, the ever-awaited moment came – Çré Gurudeva enters the Hall, resounding with the Kértana and welcomed by eagerly waiting devotees. Gurudeva’s Divine Darçana only, COMPLETELY filled all devotees hearts with ecstasy! Such is the power of Empowered personalities’ Darçana. 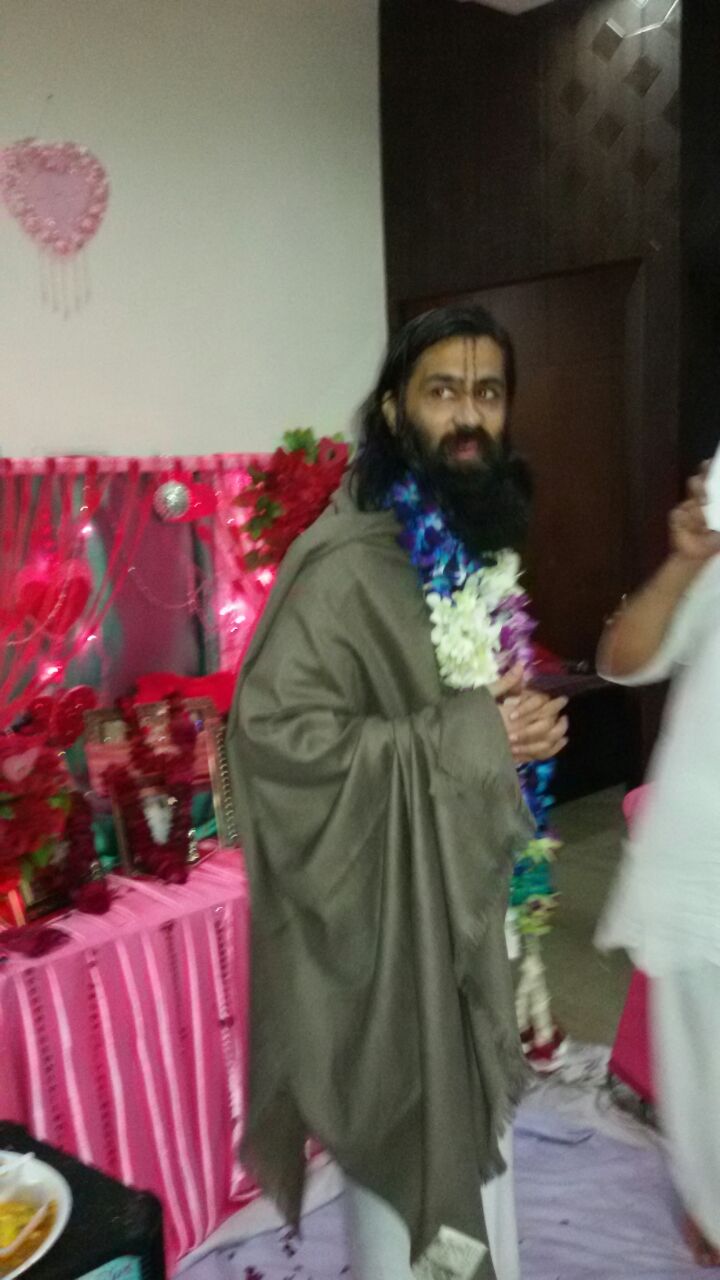 The Celebration started with the Guru Vandanä, followed by a Play fabulously presented by some devotees leaving all with immense learning and waves of happiness. It depicted the Importance of Hari Kaöhä, which as Çré Gurudeva Explains, ‘is the solution for all the problems of life.’ 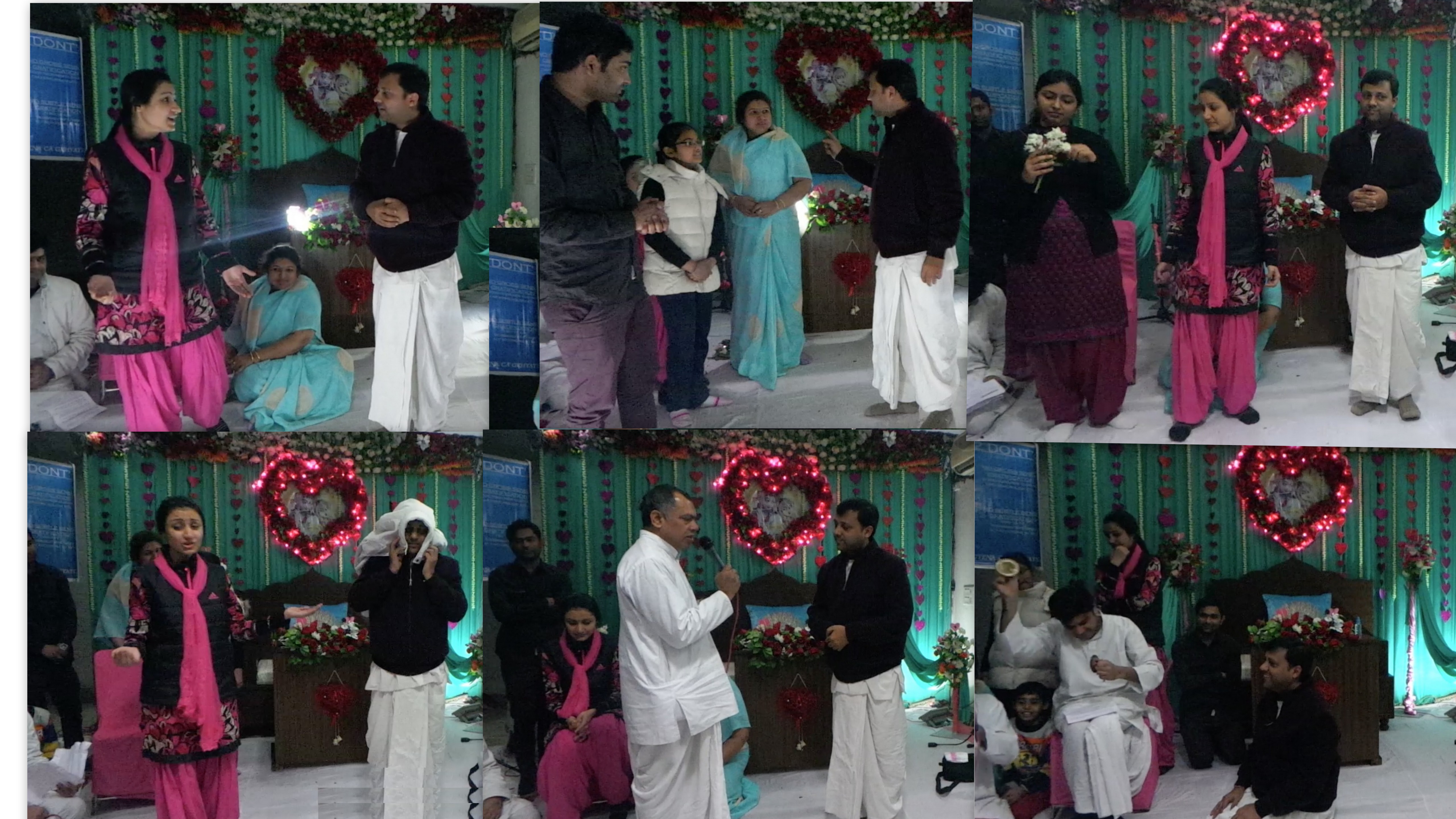 Then, a Documentary on Çré Gurudeva was presented on projector, which left all the Devotees speechless.

Thereafter, the time had come when Çré Gurudeva blessed all of us with the most enlightening Hari Kaöhä. Waves of blessedness overwhelmed everyone as the very Beautiful- “Jai Rädhe Rädhe Rädhike” Kértana by Çré Gurudeva resounded in the hall. In an hour’s Lecture, Çré Gurudeva Explained about Çrématé Rädhäräné’s Rüpa-Amåta…& the highest fortune of the maïjarés, along with explaining the importance of doing bhakti under the able Guidance. 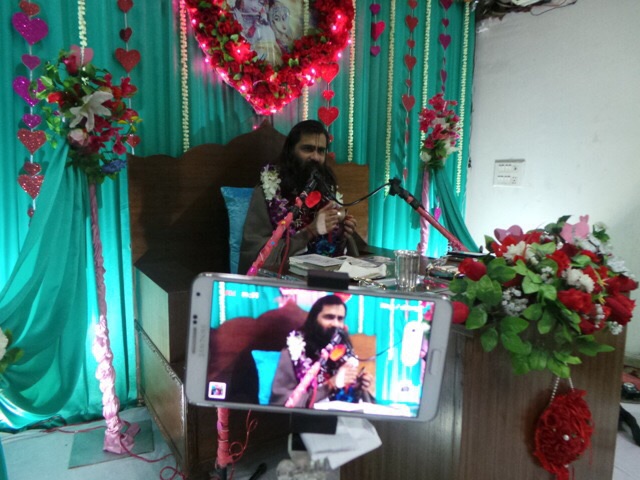 After receiving the most beautiful Hari Kaöhä, eager devotees requested Çré Gurudeva to cut the cakes. As Çré Gurudeva lovingly cut all the cakes, the very special moments were captured by the devotees. 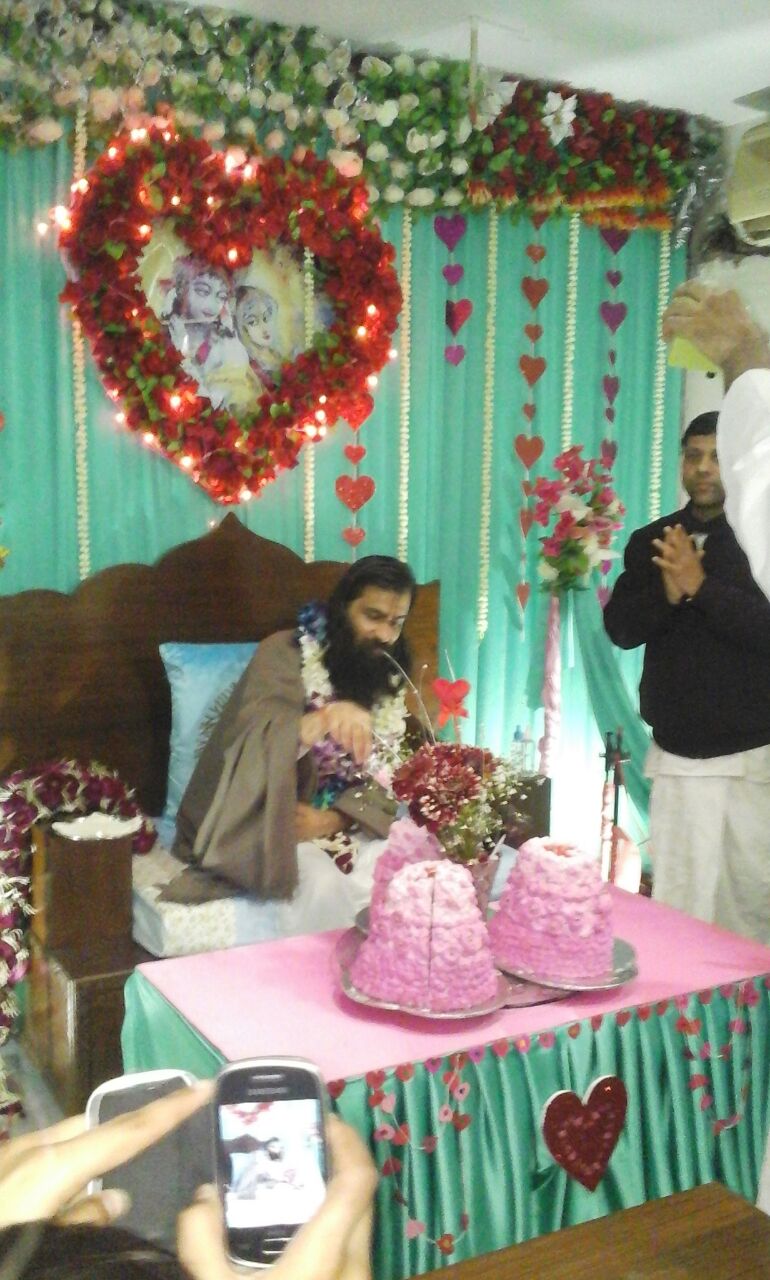 Thereafter, the offerings were made to Çré Gurudeva by devotees who then also served each other with numerous gifts. The exuberant gifts ranged from Lamination of Çré Gurudeva to Bookmarks bearing Çré Gurudeva’s Picture and Teachings; from Gratitude Diary to Pens; from Assorted Candies to Sweets; from special cookies to room freshener etc. 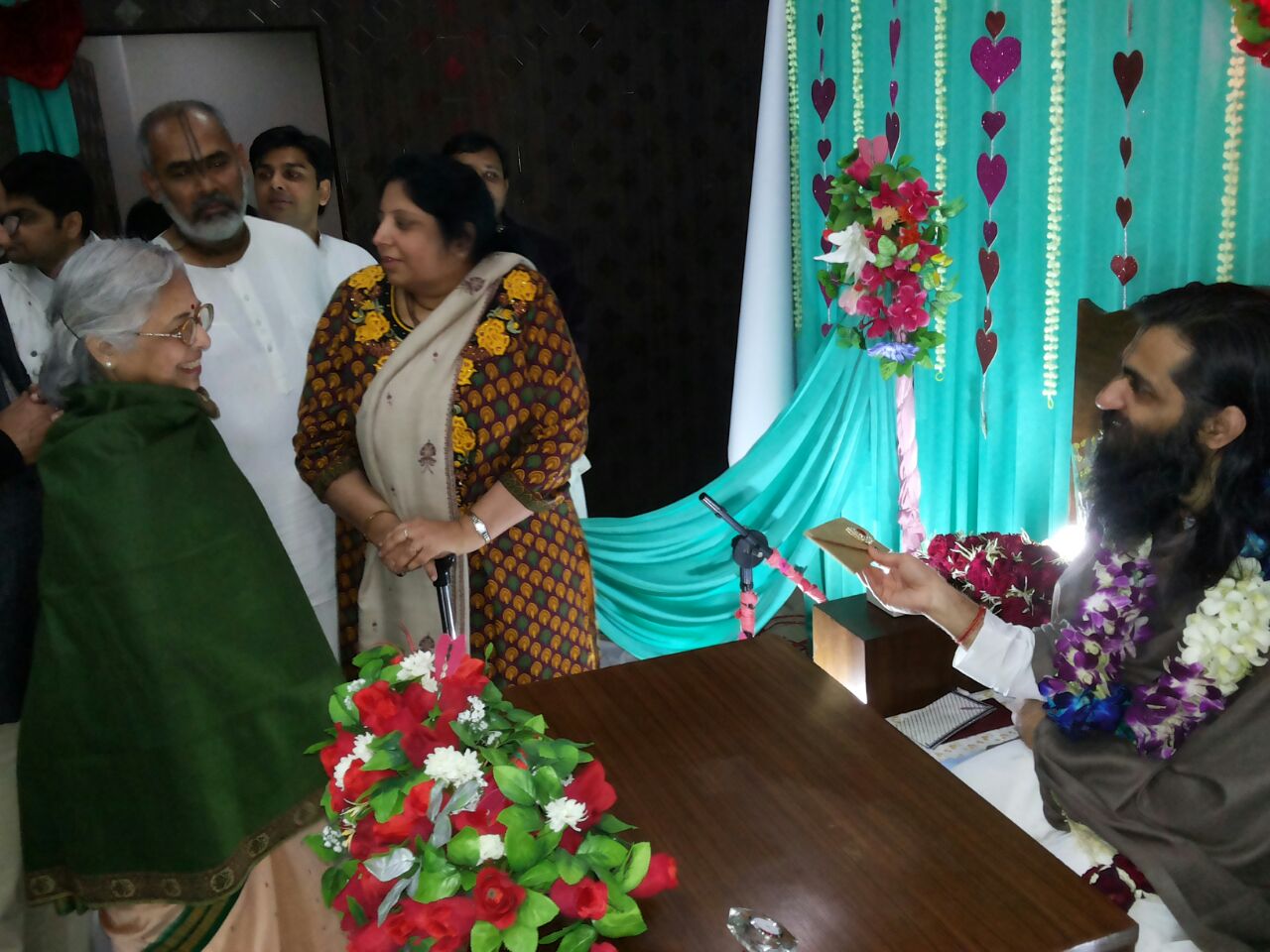 Then as the time struck for the feasting, Sumptuous Prasädaà was served, volunteered lovingly by the Mätäjés. 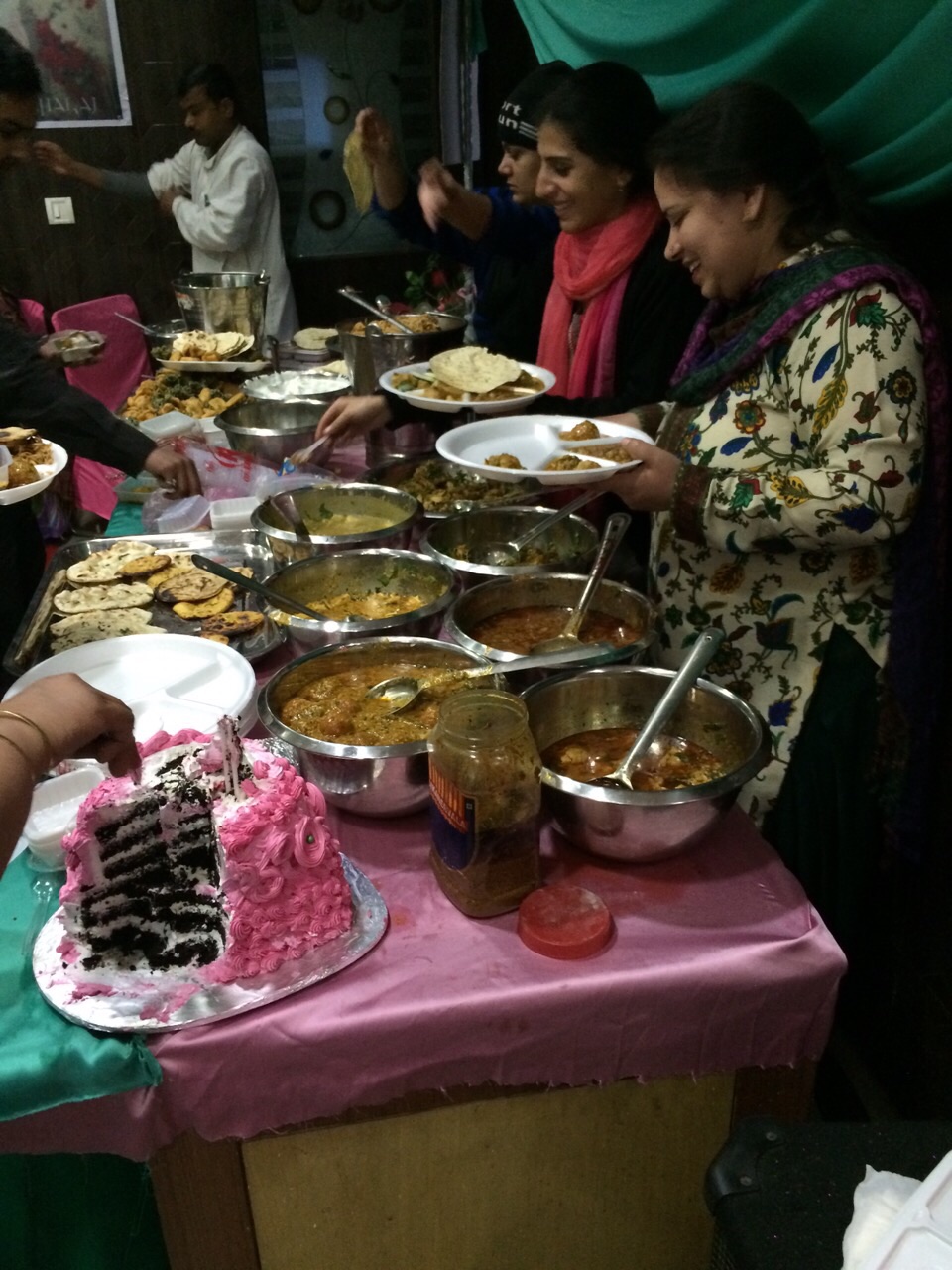 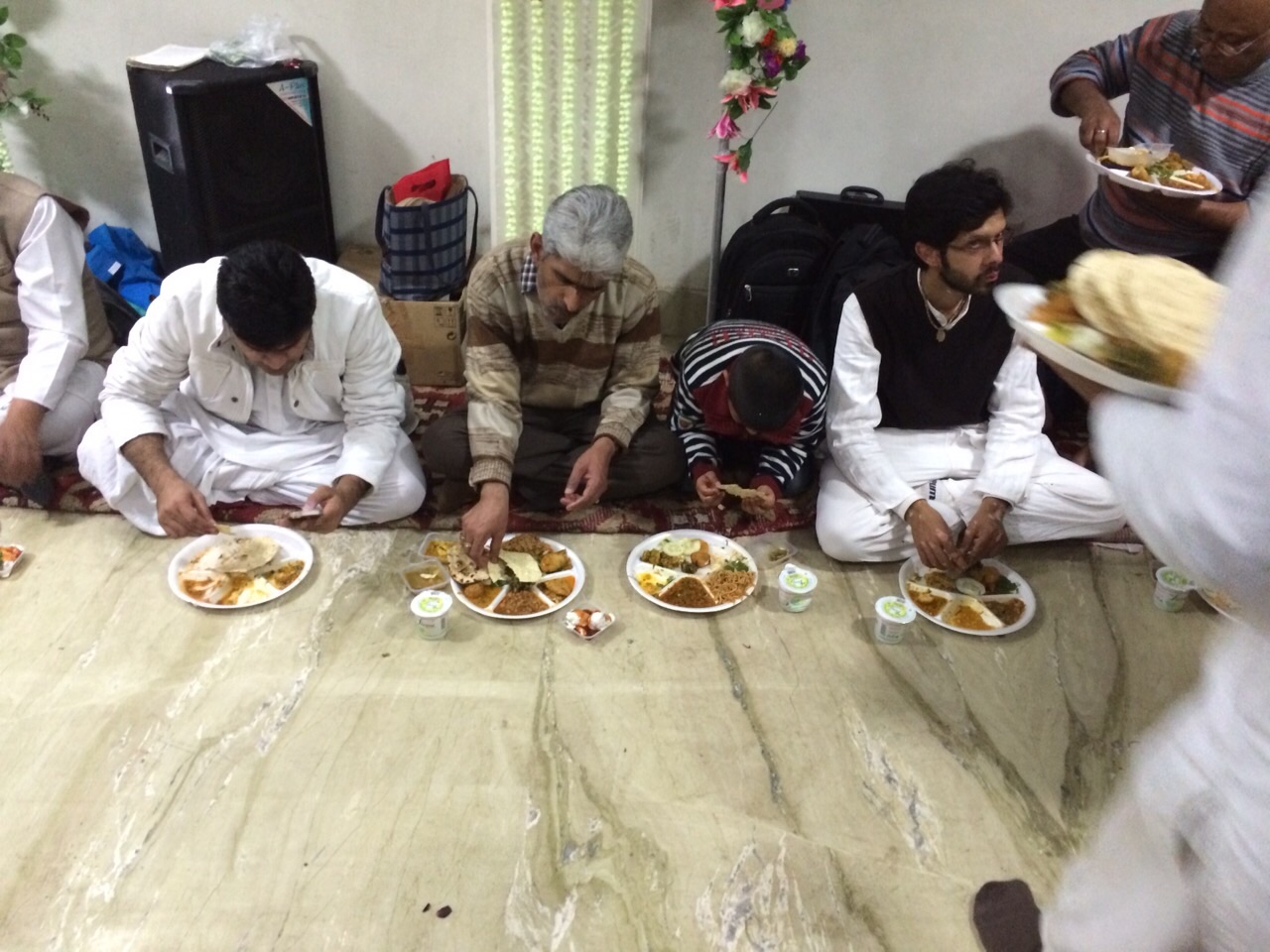 Everyone thought that it was time to conclude then… but Çré Gurudeva’s Mercy has no end. Çré Gurudeva blessed us with After-Lecture Talk. He considered doubts of devotees, emphasised that “Reading Rasa Scriptures is itself Bhajana,” not that one will first read Scriptures and then apply the knowledge into the Bhajana. Like always, Çré Gurudeva heartily appreciated devotees for their preparations and arrangements. 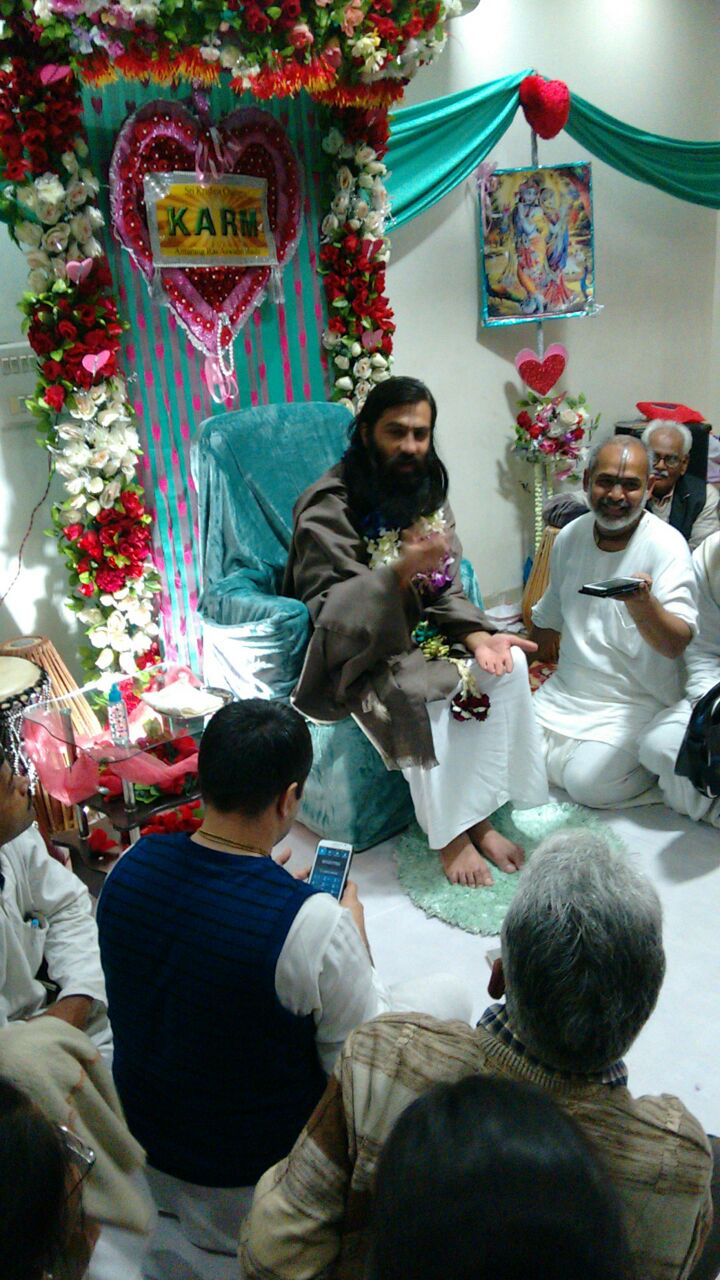 Drenching everyone with Love and everlasting relishment, as Çré Gurudeva departed from the venue, devotees followed to escort Him. 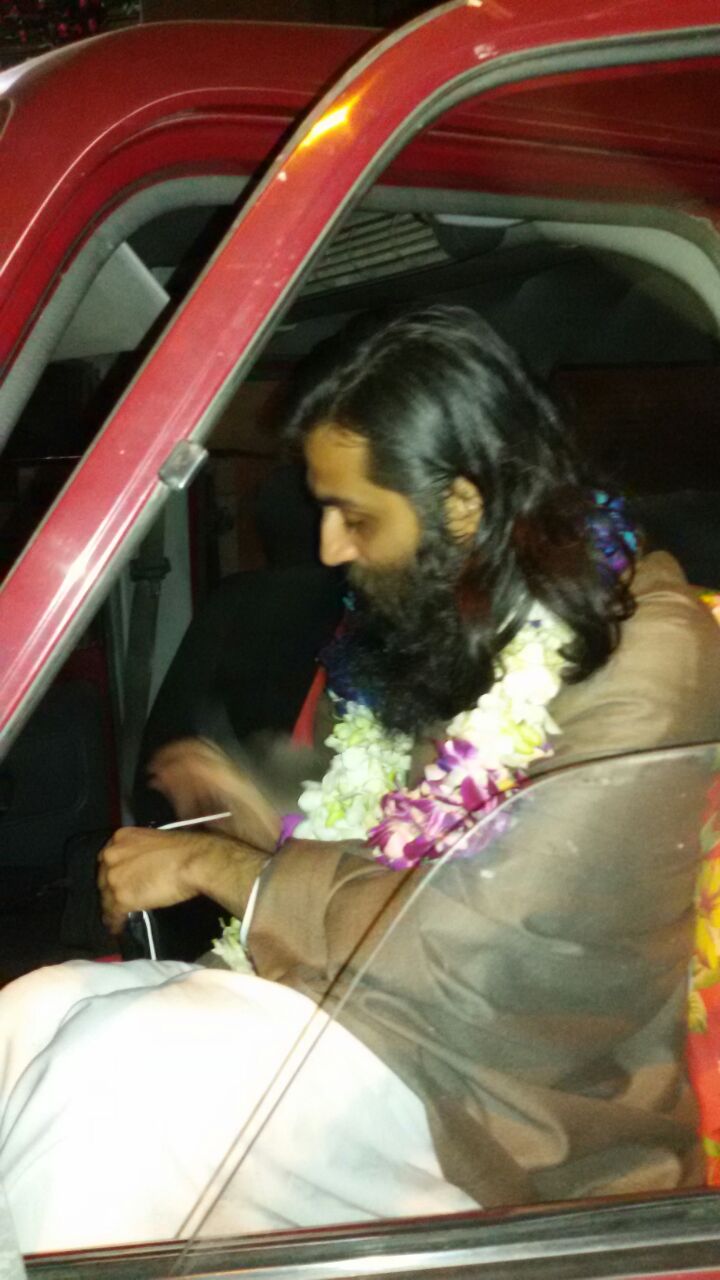 Devotees volunteered enthusiastically in winding up sevä too. As the devotees went back their homes ,they carried treasures of love filled gifts in their bags, together with loving relishments and life time memories in their hearts as they drenched into the love of Çré Gurudeva, giving inspiration to serve Çrématé Rädhäräné by reading Scriptures and hearing Hari Kaöhä. 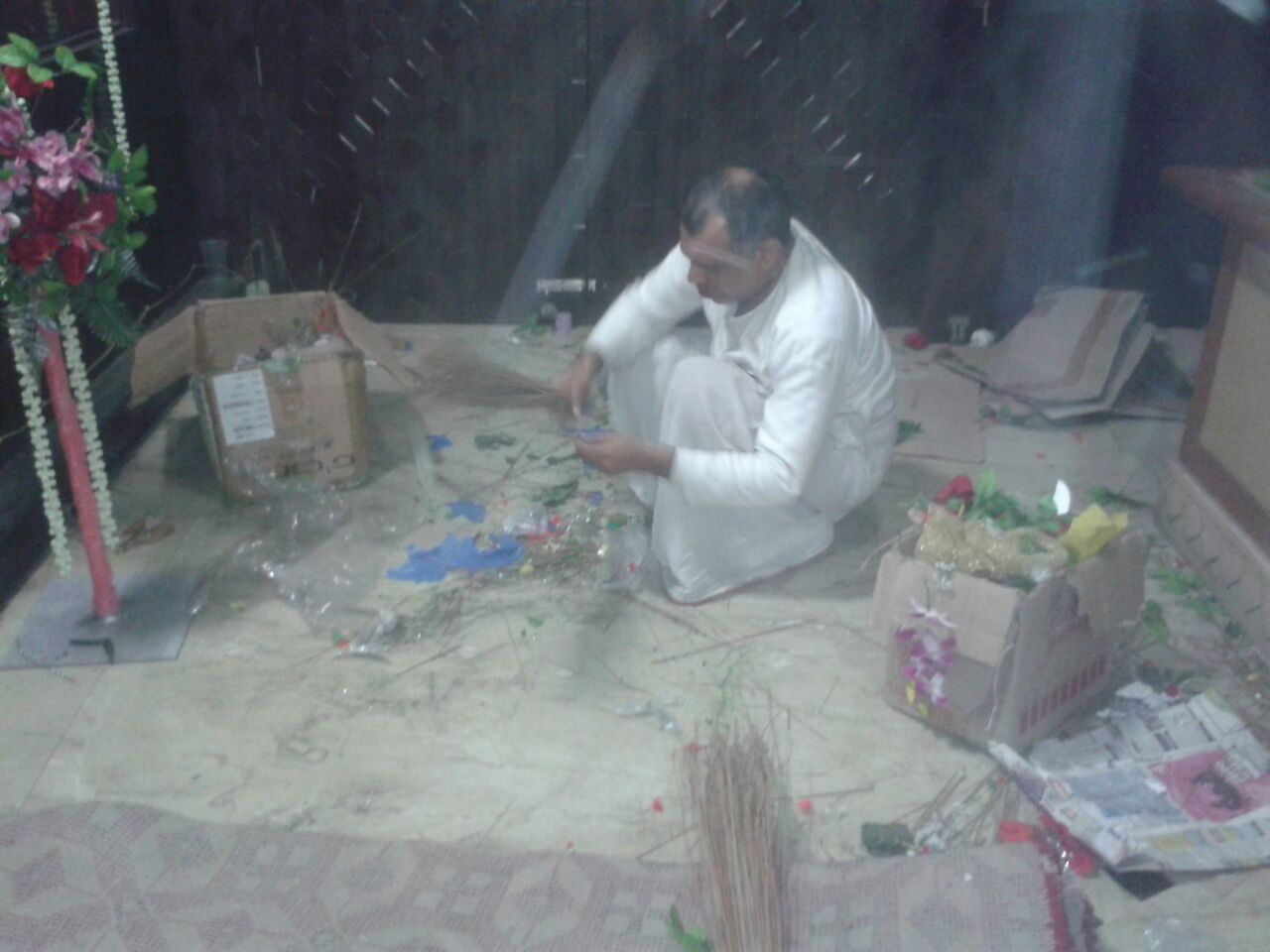 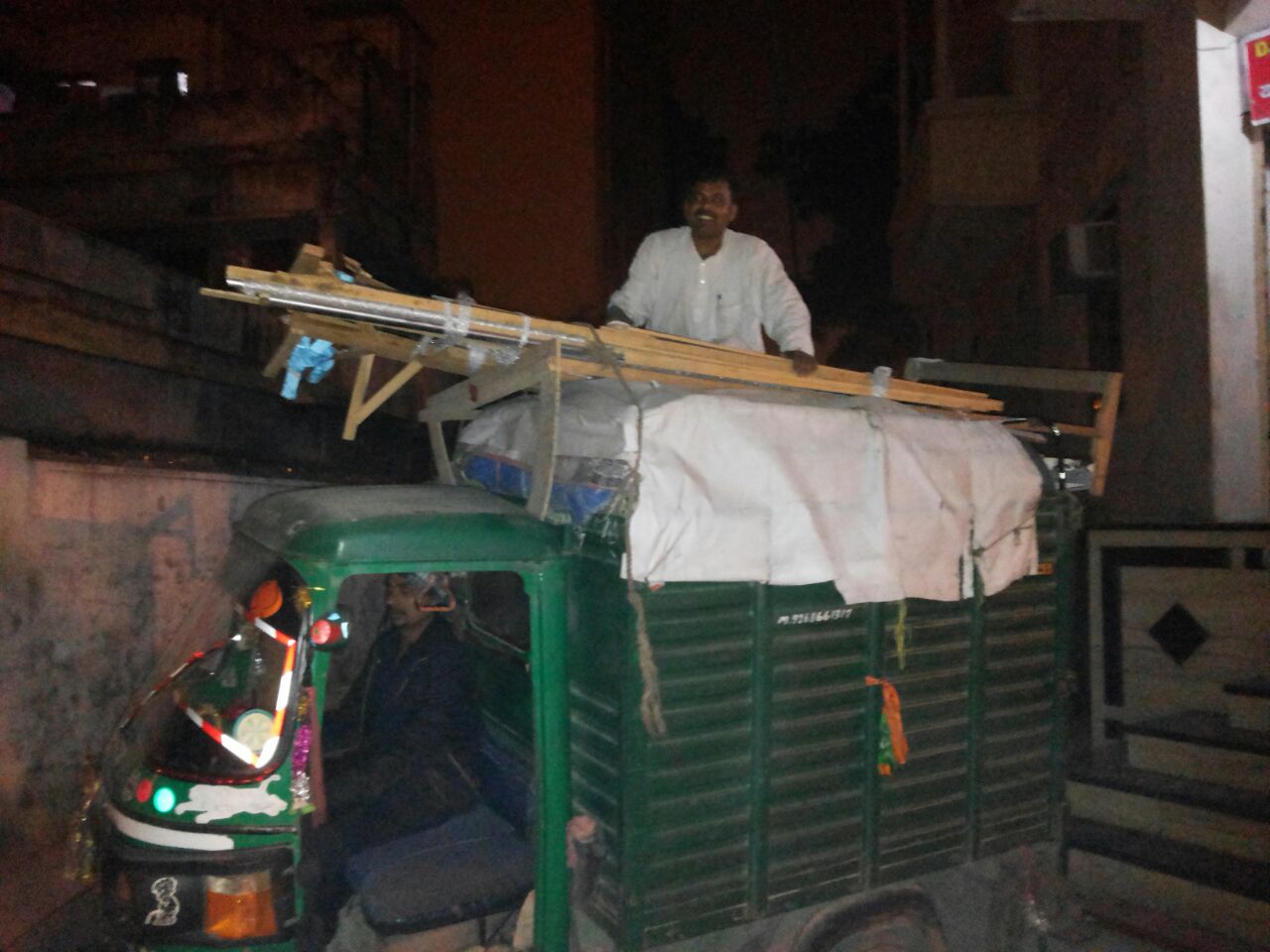 Truly, Lord’s Mercy becomes visible in fullest manner as Çré Gurudeva’s Blessings springs up on everyone on this very Merciful Occasion…

Even today, Jai Rädhe Rädhe Rädhike Kértana just doesn’t stop resonating in the heart of soooo many devotees, even after so many days. Such is the potency of Çré Gurudeva Kértanas.