The Lord of our life whom our material vision cannot perceive, whom our ears of leather cannot hear, whom our hands cannot dare to touch, The Lord who mercifully takes the form of Arca Avatära – The Deities and comes before us just to accept our services.

It was 4th of May, 2015 when we, as a family of KARM, were blessed with the opportunity to celebrate the 6th Anniversary of Çré Gurudeva’s Deities. 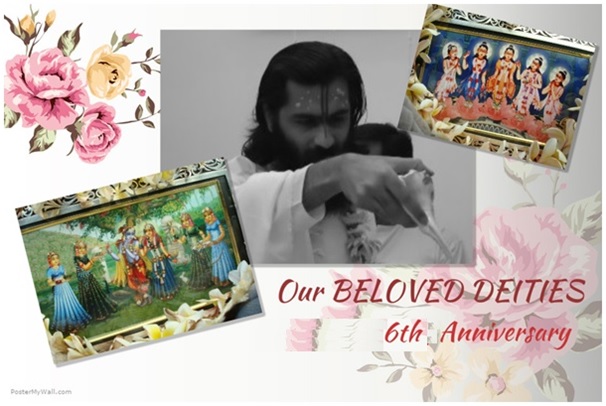 APPEARANCE OF THE DEITIES-
When Präëa Pratiñöhä of the Mürti or Photo (lamination) of The Lord is done through Vedic Mantras, then they no longer remain Mürti or Lamination, They become the Supremely Powerful Säkñät Öhäkura jé. It is also said-
pratimā naha tumi — sākṣāt vrajendra-nandana
(C.C. Madhya 5.96)
“My dear Lord, You are not statue, You are directly Vrajendra Nandana.”

Thus, when some Mahätmä does Ähaväna of The Lord through Mantras, The Lord descends from the Eternal Spiritual World Goloka. Arca Avatära are, in fact, the most Merciful Incarnation of The Lord.

The Lord always extends His pastimes as Arca Avatära in variegated forms from the time immemorial, so does these Deities- The Sevita Vigraha of Çré Gurudeva, right from the time of Their Descent.

Tithi wise The Deities were to appear on Nåsiàha Caturdaçé though Çré Gurudeva anticipating Their Appearance Day Celebration be a grand affair, feasting day in future, desired non-fasting day for Their Descent. Thus, the Deities Reciprocated, when Çré Gurudeva went to receive Them on that day, The Deities disappeared and Çré Bäbäjé Mahäräja (the Spiritual Master of Çré Gurudeva) Asked Çré Gurudeva to come the very next day to take The Deities.

The Deities are not actually how our material vision perceives. They perform various Pastimes, Reciprocates with one and all. They eat, drink, talk, hear us and also make us hear Their transcendental sounds. One MATAJI heard jingling of Rädhäräné’s ankle bells when They came to Her home. She even heard Rädhäräné coughing. Unbelievable !!! Yes Deities Reciprocate, They eat and leave bite marks, They hear our prayers. They sweat when feeling hot. They leave food remnants in the water offered. This is the omnipotence of the Präëa Pratiñöhita Deities. 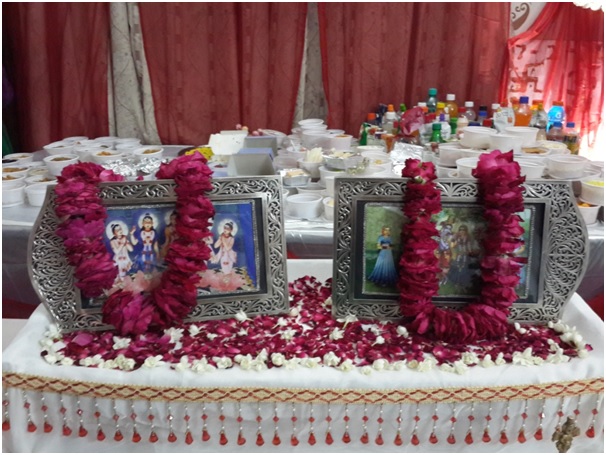 Celebration at KARM-
Every year, KARM has grand celebration and feasting time on our beloved Deities’ Appearance Day.

On Their 1st Anniversary, in the year 2010, Celebration took at Punjabi Bagh, around 300 Bhogas were offered to the Deities. Çré Gurudeva opened everyone’s eyes with Bhüta Çuddhi Lecture in which the real meaning of the term – Bhüta Çuddhi and its significance- Real Sädhanä never actually begins without Bhüta Çuddhi- was explained. 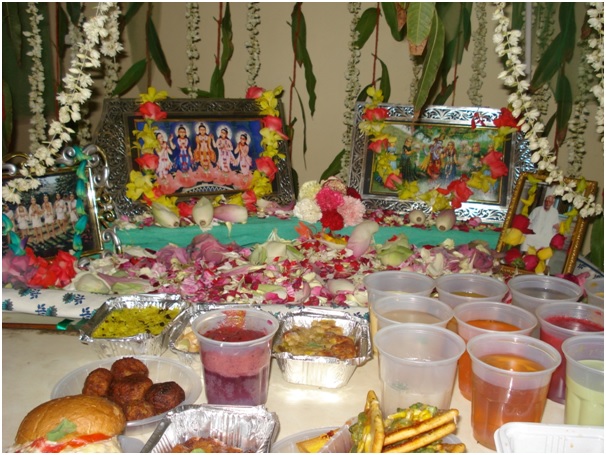 In the year 2011, amidst Second Anniversary Celebration, Çré Gurudeva delivered 2nd part on Ataeva Gopé Bhäva Lecture, which left everyone astonished of the beauty and sweetness of Rädhä Kåñëa’s Pastimes and our role as Maïjarés in assisting Them. 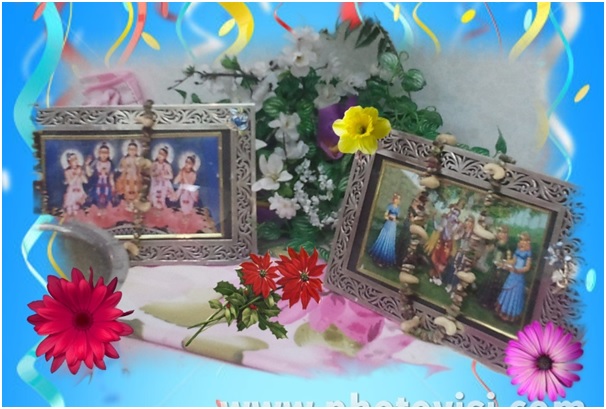 During 2012, lively butterflies hung everywhere as the theme for the day, in pink and purple. Very beautiful and glittering Butterfly cakes left everyone to wonder. The ecstatic Kértana and Änanda Sütra ‘Dharma Sthäpanä’ by Çré Gurudeva envisioned everyone of Lord’s Avataraëa in this material world. 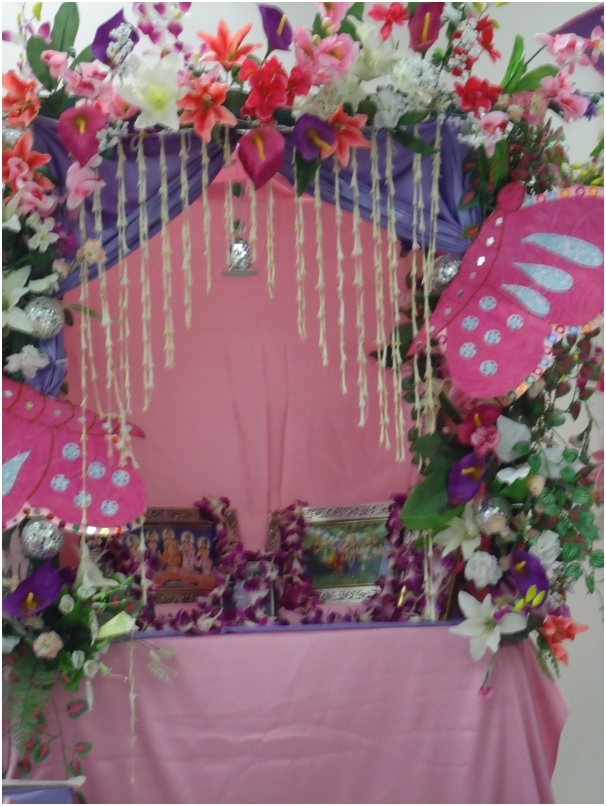 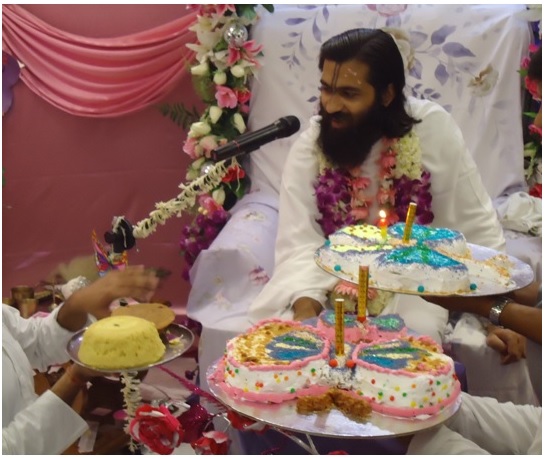 In 2013, everyone missed Çré Gurudeva’s Presence, yet devotees showed enthusiasm in making 56 bhogas and cakes and celebrating the occasion together. 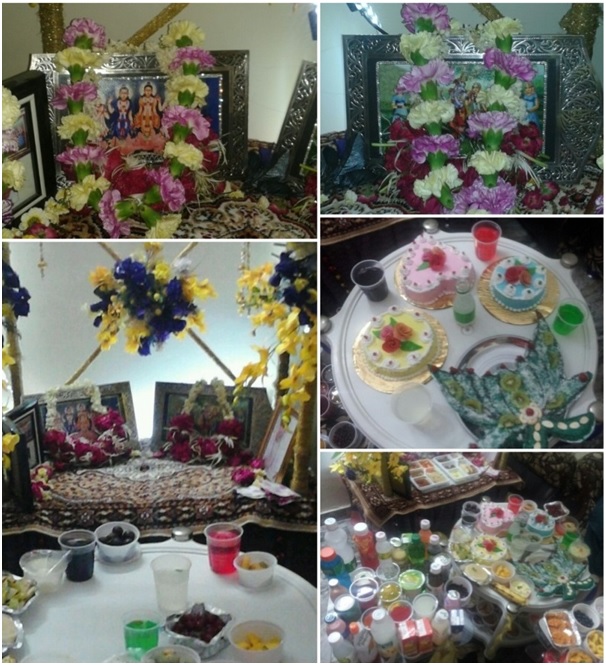 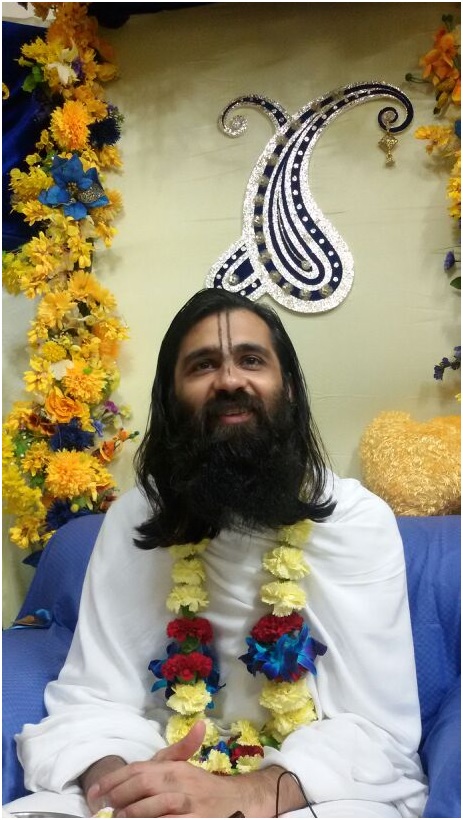 The Preparations-
The Planning and Preparations for the day had begun almost a month before. Devotees began giving the ideas of decoration, started thinking about 56 bhoga, gifts and seväs. A devotee had asked to cook whole main course Prasädaà for the decoration day, the day prior to the Deities Appearance Day, more than a month before.

It is always the Love of Çré Gurudeva which makes the devotees so enthusiastic and imbues in them a spirit of selfless service so much that their very life is to devote themselves for the service and this is because Çré Gurudeva has always taught and exemplified through His own conduct- “serve and be happy” and that the service i.e., engaging self is imperative for a Räga Märga devotee.” 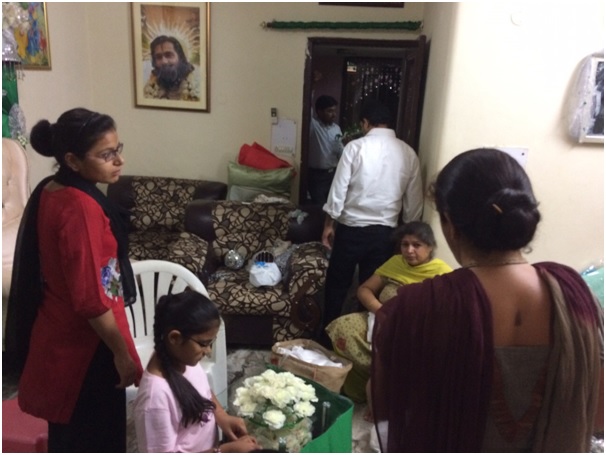 The day of decoration, devotees observed Fasting for Nåsiàha Caturdaçé but the way devotees showed enthusiasm in serving, it verily turned into feasting. The Devotees had sumptuous Prasädaà, from lots of Paneer Pakodas and lemonade to raita, sweets and other things.

The preparations saw the devotees putting earnest endeavours. One devotee had especially got made a portable frame for the backdrop, another devotee got the curtains stitched, both from their respective work places.

Two Matajis got bunches of the flowers made from their home. This makes anyone see the teachings given by Çré Gurudeva – “to engage whatever one has for The Lord’s Pleasure.”

CAKE OR A BASKET OF FLOWERS-

The Cake was the endeavour of two Matajis who devoted days for its making and it was so unique that everyone kept guessing if it was the real basket or the cake itself! It was also so heavy such that the devotees thought it better to replace the glass table with the Plastic one during the cake cutting. 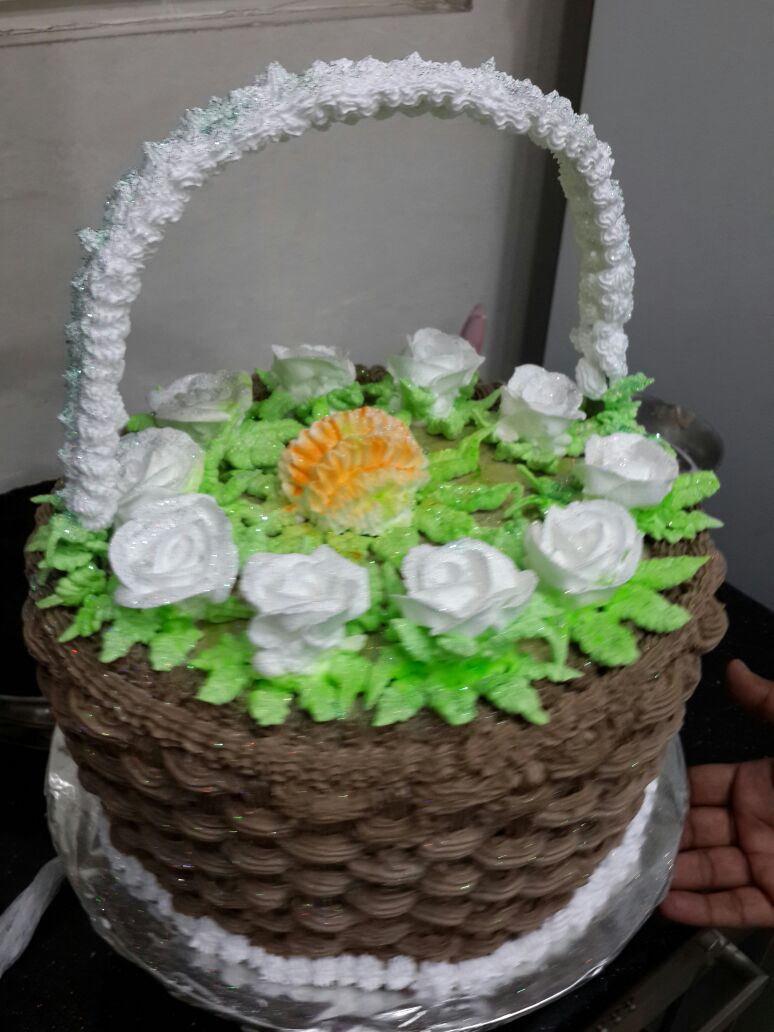 THE CELEBRATION DAY-
Most awaited day had come as the devotees, eager for Darçanämåta of Çré Gurudeva and The Deities, and yearning to fulfil their heartfelt wishes of serving The Lord of their lives, were going to have all their wishes fulfilled. 2pm, The Kértana began and the room was resounding with Glories of Rädhäräné.

Çré Gurudeva arrived exactly at scheduled 3pm. Devotees respectfully and joyfully paid their humble obeisances. Çré Gurudeva offered bhoga to the Deities. Thereafter began Bhajana and Presentation was shown depicting the Appearance of Deities and how we can render service to Them. Then Çré Gurudeva blessed everyone with His Väëé Saìga in which He explained about our eternal need, the dire necessity of Loving Relationships, possible only with the Supreme Lord. 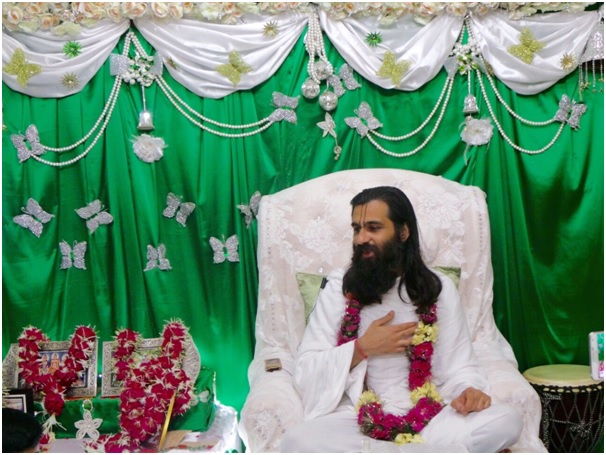 The Hari Kathä was followed by Cake Cutting and the Grand Prasädaà. Whole Prasädaà was served by 2 Devotees. 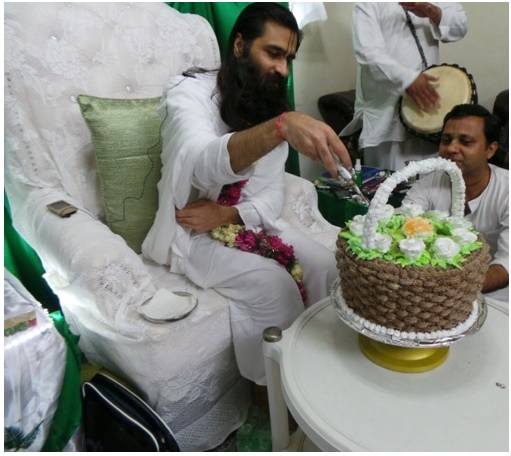 Then, devotees served offerings to Çré Gurudeva and to other devotees. Gifts, from energy drinks to kesar chandan sharbat; from Agarbattis (Incence), Jyots to desi ghee.. This was not all.. Çré Gurudeva’s Love knows no bounds, He lovingly sent pouches of different Dry Prasädaà (through Courier) for outstation devotee who could not attend the Program.

There were more than 500 offerings made in 56 bhoga.

One devotee had made rice of 56 types.

Another made an offering of more than 70 kinds of toffees.

11 kinds of Halwas were made by one.

One outstation devotee sent few items to be offered to the Deities.

A devotee had started making dry bhoga offerings 2 days before, in the morning of the day of decoration and then after coming back. Inspiring dedication to serve the Deities !

It was the 6th year of The Celebration of The DEITIES ANNIVERSARY.

After the Program, every devotee went home with one bag full of gifts, another bag of 56-Bhoga Prasädaà.. and with countless relish and cherish moments.