Çré Çré Shachinandan Jé Mahäräja is the Divine Messenger, Truth and Wisdom Personified and the Torch-Bearer to the entire humanity.

His Appearance and Initiation- 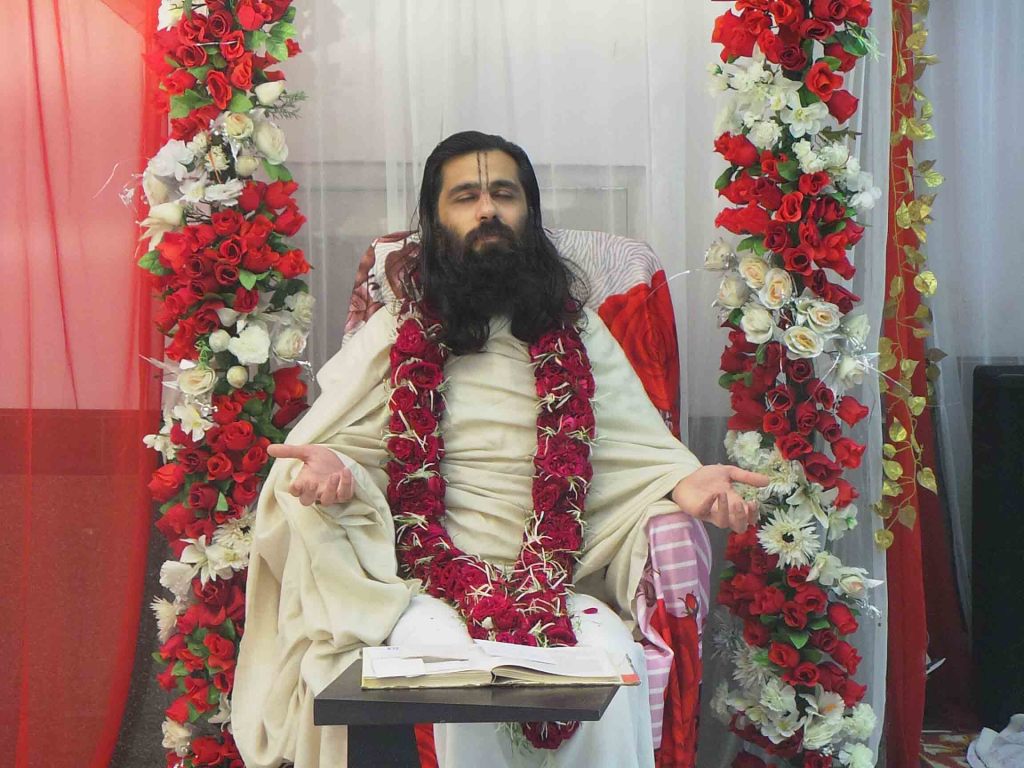 Çré Çré Shachinandan Jé Mahäräja gifted this mortal world with His Appearance on 10th February in 1977 in New Delhi, India.

Çré Gurudeva always had an ardent spark of acquiring knowledge about Absolute truth and a natural inclination towards reading Scriptures. It is very common to find Him spending 8-10 hours at a stretch, associating with the Scriptures. Çré Gurudeva remains in His room for days and days, sometimes for months at a stretch, without meeting anyone. Just sitting at one place for such a long duration is next to impossible for any ordinary person, while composed at one place. It really requires a very high level of purity to practice this.

In mid 1990s, Çré Gurudeva got associated with a renowned spiritual society based on spreading Kåñëa Consciousness. Çré Gurudeva, from delivering Lectures to personally talking on one to one basis, from giving after-Lecture Counselling (s) to regularly following them up, did anything and everything while selflessly rendering this humble service of making people, devotees. And thus the temple became one of the most active preaching centres of Vedic Education and Culture, in whole world, taking care of thousands of devotees connected to the temple.

The milestones in the Temple History – formation of Congregation Groups, boys’ group, girls’ group – were laid down by Çré Gurudeva’s strenuous Efforts. Thus, mere a Temple building (where no one used to come) became an eminent platform for the spiritual development of devotees – girls, boys, married couples and everyone could grow there individually and flourish together as a family.

But as the saying goes- “Whatever happens, happens by the Divine Will of The Lord”, the time had come for a Renaissance. Certain facts of the institution were revealed, which were being practised without any scriptural basis. Moreover, it did not commensurate to fulfil for what Çréman Gauräìga Mahäprabhu had especially descended, to bestow to all the people of this Kaliyuga. Çré Gurudeva remained undeterred and principled for the path of pure devotion as He, along with other few devotees left the institution , the opulence , lavish culture , only and only to attain The Highest- The Maïjaré Bhäva.

This marked for a New beginning, the Beginning of the Era which would change the entire humanity forever.. that would submerge and drench the humanity/mankind, into the Ocean of Selfless Reciprocated Love. 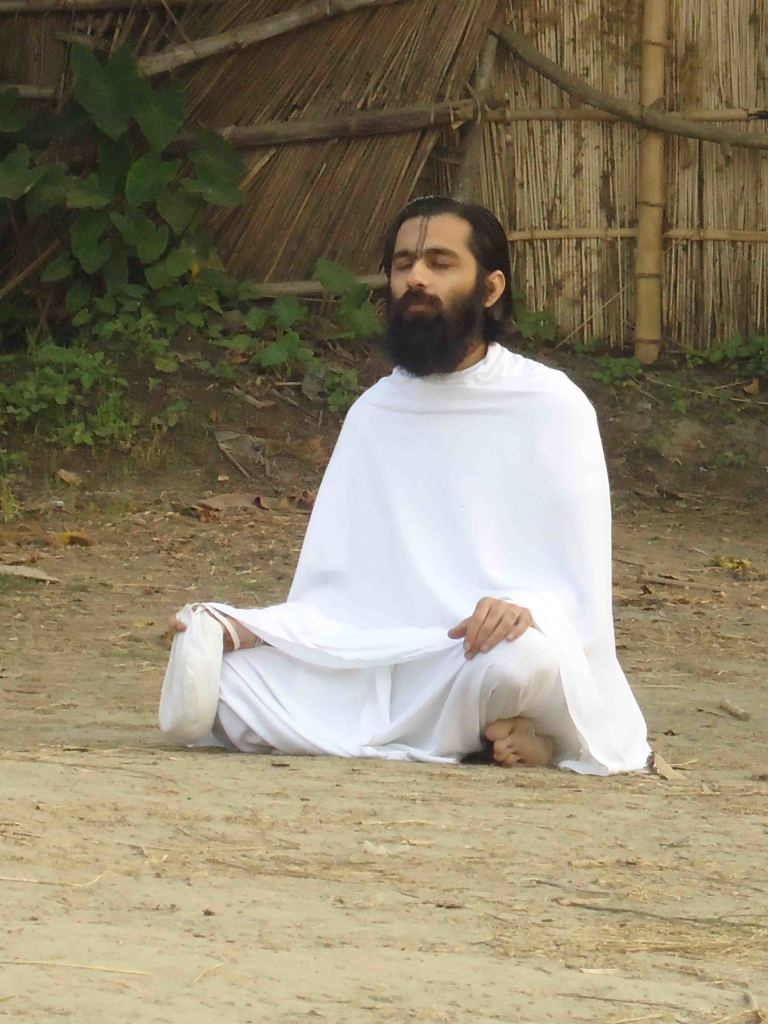 Çré Gurudeva’s uncompromising Approach to the Principles of Devotion, Purity and extraordinary Saintly qualities were exemplified as Çré Gurudeva remained composed and unflinching for The Truth even in the face of adverse circumstances.

Çré Gurudeva is the true Gauòéya Äcärya. He is the 17th Guru, in an unbroken bonafide lineage, belonging to Lord Nityänanda, Mä Jähnavä Parivära, which is coming directly from Çréman Gauräìga Mahäprabhu, and is carrying on the rich traditions of the previous Äcäryas in worshipping Çré Çré Rädhä-Mädhava in the mood of a maïjaré, the dearmost friend and servant of Çrématé Rädhäräné. Çré Gurudeva is passing on the same to the next generation of disciples, thus bestowing upon them the greatest boon which Çréman Mahäprabhu Himself came to give to the fallen jévas of this very special Kaliyuga. This particular type of mood/bhäva of worship is called maïjaré bhäva, and is the highest relishment to which a jéva can ever ascend to, in both the spiritual as well as the material world… there is NOTHING higher than this(Bhava). 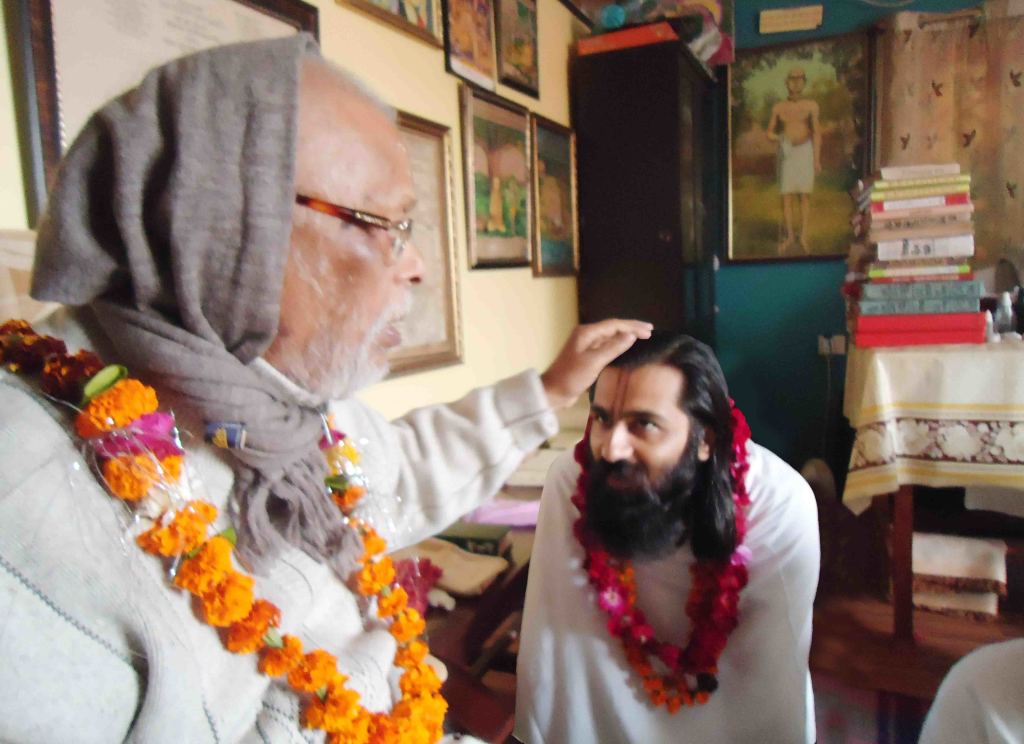 Without even any mental ‘if’ or ‘but’, Çré Gurudeva humbly agreed. He dropped His own inner desire to lead a life of solitude and started making preparations to fulfil the desire of His Gurudeva. Then, His Gurudeva Instructed Him for Temple construction in Delhi, about the Deities, guided about location of Temple etc.

His Wisdom : through Unheard Lectures, Granthas- 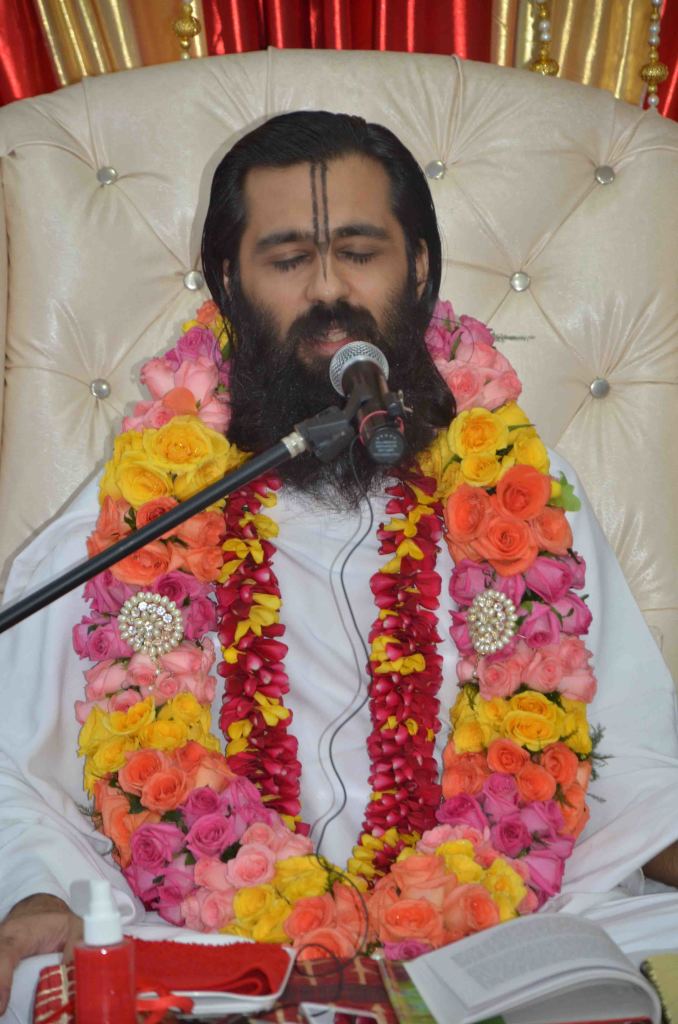 It is stated in Mahäbhärata- “Life is useless without Dharma/Bhägavata.” And to understand The Scripture Bhägvata, one needs Living Bhägvata. In other words, Scriptures cannot be understood without the One who is actually living Scriptural Teachings. Çré Gurudeva personifies this (Scriptural Teachings). Infact, there is nothing as pure as the Real Knowledge, and Çré Gurudeva is bestowing it on upon all.

From a long time, with His unalloyed and unflinching faith on Rasa Çästras, “çästréye çraddhä”, Çré Gurudeva, being “çabda brahma and parabrahma niñëät”, has been inculcating the same faith in the devotees through numerous unheard Spiritual Discourses. These are not only confined to elaborating on Bhagavad Gétä, Çrémad Bhägavatam çlokas, but extend to the teachings of Gauòéya Vaiñëavism, subtle topics. They unravel the mysteries of the Scriptures like the Vedas, Upaniñads, Bhagavad Gétä, Bhägavatam, Gauòéya literatures and many others, thus providing Spiritual solutions to all the problems of life and befitting Them to be called as ÄNANDA SÜTRAS. Çré Gurudeva’s Unparalleled and Unprecedented ÄNANDA SÜTRAS are straight forward and uncompromising in bringing forth the truth and pierces through the layers of contaminated consciousness of various births.

Whosoever hears these Änanda Sütras, though not live and even from far a distance cannot help being attracted to the profound wisdom and simplified understanding inherent in them, and desires to hear them again and again. Çré Gurudeva makes the deepest scriptural truths accessible to everyone in the simplest language, enabling aspiring sädhaka to blossom spiritually very quickly. Çré Gurudeva is divine in every aspect. His words are just not mere words. It is Çré Gurudeva’s self-realized knowledge. They are mercy-laden and full of mercy.

His Ecstatic Kértana carries Love for The Lord. It directly touches the heart arousing from deep within the pure consciousness of The Lord and servitude to Him.

As it is well known that it is difficult…rather impossible for a Ph. D qualified person to teach ABC to a nursery student…but for the really Compassionate and Affectionate “su-snigdha mehtar” like Çré Gurudeva, it is very natural to revive the natural consciousness of eternally  kåñëa-bahirmukha jīva by infusing the stream of selfless loving service into the devotees under His shelter. This humble service of Çré Gurudeva has not been confined to a particular section of people but He has been nurturing all- brahmacärés and sannyäsés, girls and boys, married and unmarried- everyone by enriching them with the Essence of Scriptures, clarifying all their doubts, guiding them individually and constantly inspiring/ encouraging them, Çré Gurudeva is thereby uplifting them spiritually. It has not only been the Knowledge enriched with profound wisdom and enlightenment, but the Selflessness and the Purity of Çré Gurudeva which always attracts one and all !

Very soon the Supremely Pure, the Real Knowledge will be delivered by Çré Gurudeva through the Books namely ‘Be A Gauòéya Vaiñëava’, ‘Änanda’, ‘Samañöi Guru’, ‘Particle of Service’, ‘Humanistic Thinking’, ‘Love’ etc., thereby enlightening the humanity and uprooting their darkness of ignorance forever !! 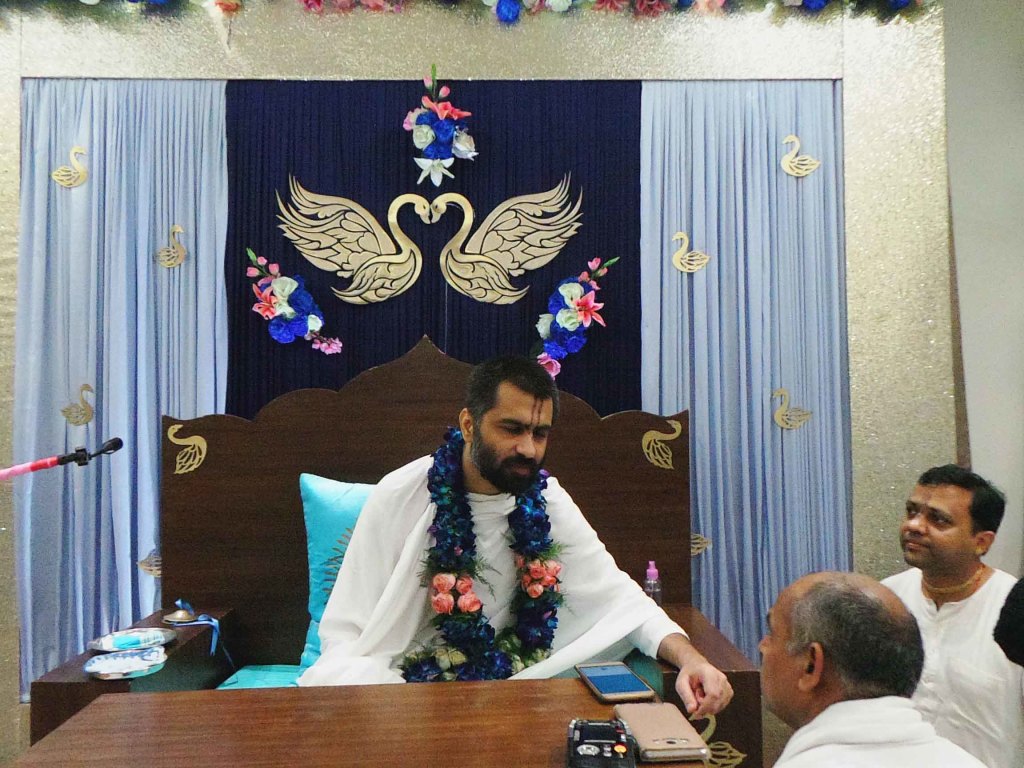 To visit a new country or even a new place, one needs a guide. To learn piano, guitar etc., one needs guidance. Likewise, knowledge (material) cannot be acquired without teacher, professor, tutor etc. Thus, it is impossible to know anything of the Spiritual World (about which one has no direct experience or actual realization) without spiritual guidance. This guidance is an expression of love by our revered Çré Gurudeva.

It is well known that it is difficult…rather impossible for a Ph. D qualified person to teach ABC to a nursery student…but for the really Compassionate and Affectionate “su-snigdha mehtar” like Çré Gurudeva, it is very natural to revive the natural consciousness of eternally kåñëa-bahirmukha jīva by infusing the stream of selfless loving service into the devotees under His shelter.

This humble service of Çré Gurudeva has not been confined to a particular section of people but He has been nurturing all- brahmacärés and sannyäsés, girls and boys, married and unmarried- everyone by enriching them with the Essence of Scriptures, clarifying all their doubts, guiding them individually and constantly inspiring/ encouraging them.

Even in spiritual organizations, it is usually considered that Dékñä (Initiation) is the destination.. but as described by Çré Rüpa Gosvämé in Çré Bhakti Rasämåta Sindhu, of the 64 items of devotion, guru pädäçraya tasmä kåñëa dékñädi çikñaëam i.e., taking shelter of the Lotusfeet of Çré Guru and taking Initiation from him is the first and foremost gateway to the path of devotion after which Bhakti actually begins. One needs instructions on Bhajan- how to chant Mantras, which Scriptures to read, how to practice spirituality while being in material life etc., which is given in KARM under the guidance of Çré Gurudeva.

In today’s busy world, when one practically has no time even for himself, Çré Gurudeva is lovingly spending days & nights non-stop on His Disciples to uplift them spiritually. It is a common perception that to seek guidance, one needs to personally meet & narrate his problem directly to the guide. Under Çré Gurudeva’s Divine Shelter, this is not so! In other words, the Loving Guidance and Shelter is not barred by distance or even words. Many disciples, with whom Çré Gurudeva have never even talked directly, are getting non-stop guidance from Çré Gurudeva through KARM Authorities. Under Çré Gurudeva’s all merciful and limitlessly loving Shelter, no devotee can ever miss out on any relationship. 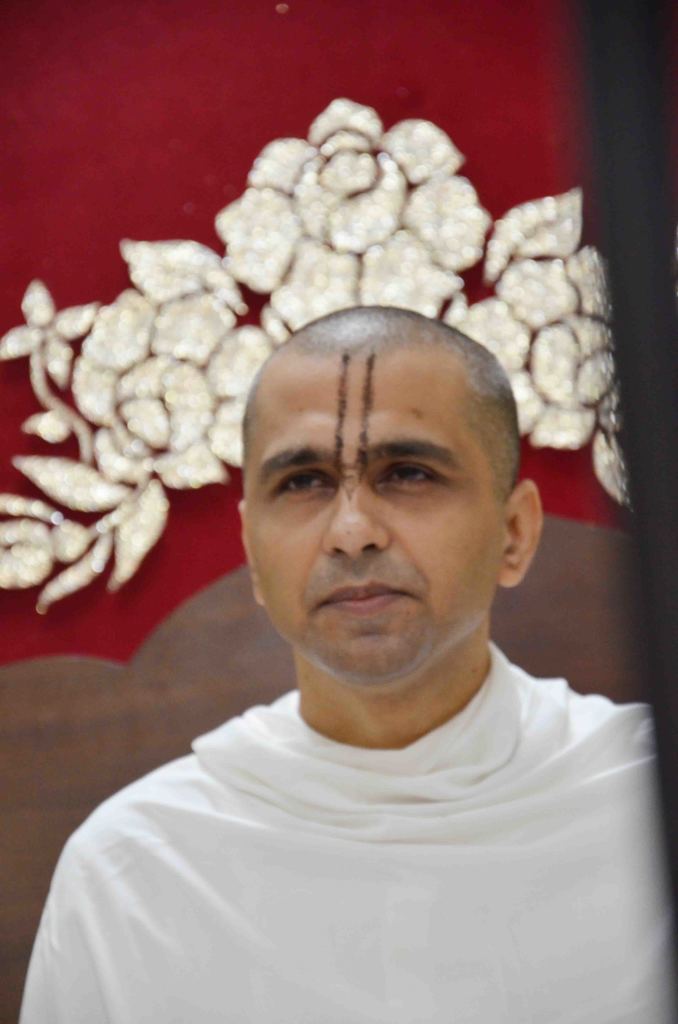 In the present age of Kaliyuga ‘The age of quarrels’, it is next to impossible to find people from different walks of life, of different ages and having no blood relation being happily unified under one shelter. But through KARM, Çré Gurudeva has turned this into a reality by establishing a culture of selflessness built on a steady foundation of bonafide Scriptural Injunctions.

Bhakti is generally considered to be full of austerities, penances and sacrifices. But under Çré Gurudeva’s Divine Shelter, it becomes so spontaneous and effortless.

Çré Gurudeva is not only bestowing Spiritual Teachings but also giving the Environment for everyone to learn, the platform to practice and the much needed aspiration to grow. Many devotees from different parts of the world like Russia, Germany, Nepal, Croatia, USA etc. have also taken Shelter. Birthdays, Anniversaries find new meanings. They are taken up as the opportunities to develop deep loving relationships through serving devotees.

Çréla Rüpa Gosvämé’s Teachings are preached in many spiritual societies, but is practised to the highest limit on planet earth in KARM as foremost priority by all devotees.

[Translation :: Offering gifts, accepting gifts, revealing one's mind in confidence, inquiring confidentially, accepting prasäda and offering prasäda are the six symptoms of love shared by one devotee and another.]

These teachings are given to all those who are Rüpa-anugäs (in allegiance of Çré Rüpa Gosvämé) but its real essence gets revealed only to the devotees who receive the benediction of Çré Gurudeva Association.

Through Çré Gurudeva’s own conduct, one can learn how to remain immersed in the flavours of devotional service following these six préti lakñaëa, guhyam äkhyäti påcchati  in particular, and thus to remain in the realm of ecstasy day and night, relishing Lord’s sweetness. Exchange of gifts, serving and accepting Prasäda is a tradition of KARM Devotees.

Under Çré Gurudeva, the journey from-

is travelled very blissfully and within no time when practised in right perspective.

His Directive : ‘Love all, Respect all, Serve all’- 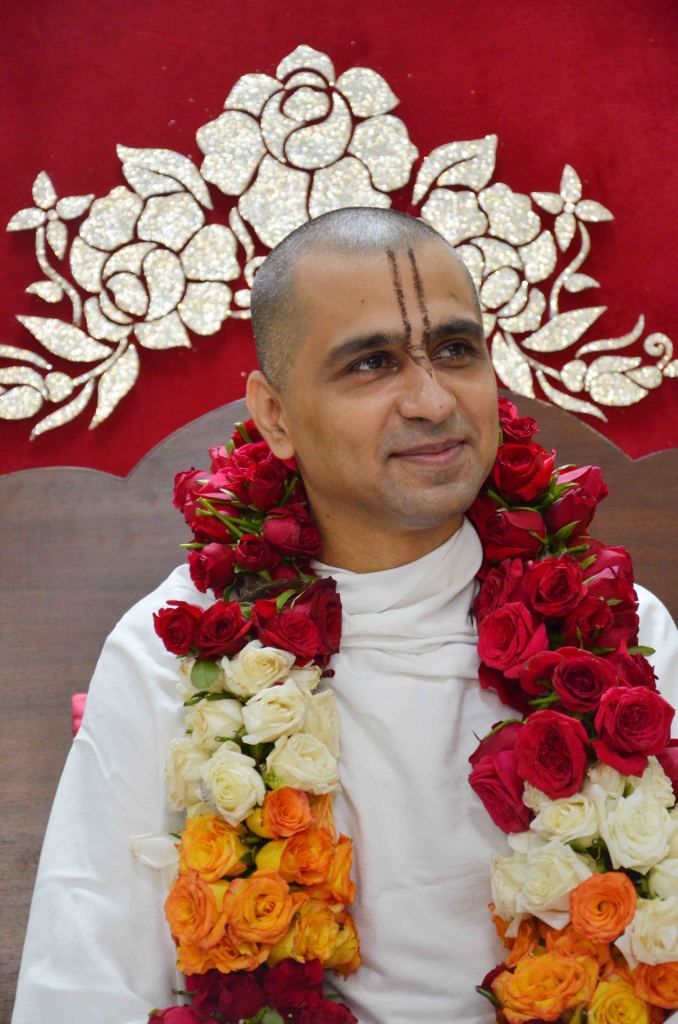 Çré Gurudeva believes in loving all, respecting all and serving all living entities. Whoever gets the opportunity to have Çré Gurudeva’s Darçana even once, can feel His charismatic effulgence and magnetic attraction. It is said- ‘The highest expression of happiness is love, and the highest expression of love is to take living entities closer to The Lord’. Through KARM, Çré Gurudeva is not only bringing everyone closer to The Lord, but also enabling all to enter into the innermost chamber ( Nibhåta-Nikuïja) of The Lord as a dear maïjaré, in this life only!