Tilaka varies in design and composition according to the group an affiliate belongs to, and so the various Vaiñëava Sampradäyas each have their own distinctive Tilaka which depict the siddhanta of their particular lineage.

Devotees should have transcendental pride wearing “this” tilaka given by their respective Guru, for it is actually our true identity. The tilaka determines who we actually are and where do we belong to. Caste, creed, colour, material names of this material world are all temporary and will end with the end of the body, but the eternal identity stays for eternity.

One must understand that the tilaka one puts on body here, is the eternal tilaka in Navadvépa. This tilaka is not just for this world, it is eternal and has been passed down through a lineage of disciplic succession starting from eternal associates of Lord Gauräìga. One should put on that tilaka throughout his life which one’s Gurudeva gives at the time of Dékñä.

Receiving Initiation (with Mantras, Tilaka etc.) in a Bonafide Gauòéya Vaiñëava Paramparä is a matter of the highest fortune for any jéva, for, one not only gets the opportunity to be connected to the Lord, but also gets the eternal identification (tilaka) in the conditioned state itself. Even Lord Gauräìga Mahäprabhu Himself wears a tilaka daily.

Mahäprabhu’s body was anointed with sandalwood pulp, and He was nicely decorated with tilaka. His movements surpassed those of a maddened elephant.

Nityänanda Parivära has a sharp triangular leaf in their tilaka.

Narottama Parivära has a tulasé leaf with a small stem.

Çyämänanda Parivära has an imprint of Rädhä’s ankle bell with a dot in the centre.

Srinivasa Acarya Parivara has a symbol of tamal tree leaf. 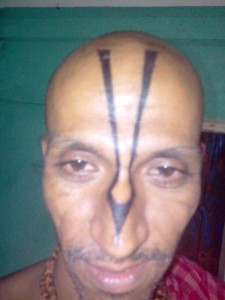 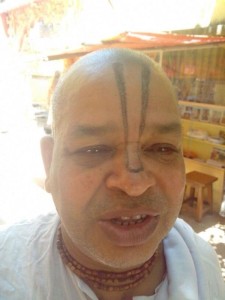 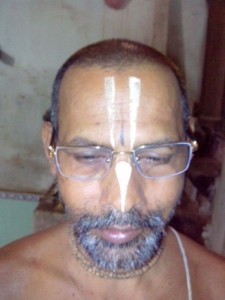 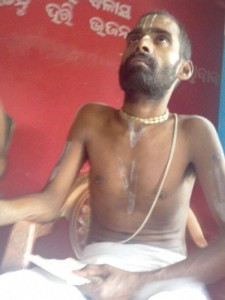 Question- why it is inappropriate?
Answer- because they are eternally two different eternal pariväras.

Without decorating/applying tilaka on the body, all sädhanä is futile. There is a proper vidhi, a procedure/method in which one applies tilaka on one’s body. After taking bath and before resuming his daily sädhanä, Gauòéya Vaiñëava puts on 12 tilakas, as mentioned in Caitanya Caritamåta..

In the past over 100 years, many deviations from Real Gauòéya Vaiñëavism in context to Philosophy, Tradition, Tilaka etc. have taken place. One must always follow Guru, Sädhu, Çästra in every sphere for success, especially for knowing the basic understanding about Gauòéya Vaiñëavism.

Every Parivära has its own well-defined Tilaka, which is applied in one particular manner from the time immemorial. Tilaka cannot be manufactured nor can any institution claim to have invented one or have exclusive rights over any bona-fide tilaka.

There are several references in various scriptures extolling the eternality and the importance of applying tilaka daily.

No matter where a person dies who has applied tilaka on his body or in whichever way he dies, even if he is dog eating witch, even then he goes to the abode of Lord on the spiritual planet and is worshipped there.

In the Padma Puräëa it is mentioned that persons who apply tilaka, are to be understood as the devotees of Lord in this world. Their presence makes the world purified, and anywhere they remain, they make that place as good as the Spiritual World.”

A similar statement is in the Skanda Puräëa, which says, “Persons who are decorated with tilaka and who mark their bodies all over with the holy names of the Lord, and on whose necks and breasts there are tulasé beads, are never approached by the Yamadūtas.”

The Padma Puräëa also mentions, “A person whose body is decorated with the tilaka, with paintings of the holy name of the Lord, is delivered from all sinful reactions, and after his death he goes directly to Kṛṣṇaloka/Eternal Abode to live in association with the Supreme Lord.”

On the other hand if one fails to apply tilaka given/ bestowed to him by his Guru or he feels ashamed in doing so, thinking he might get ridiculed, then he commits offence at the lotus feet of his Çré Guru and there is no one who is more unfortunate than him.