To celebrate the 9th Anniversary of our Beloved Deities, Çré Çré Rädhä Kåñëa and Païca Tattva, KARM Devotees came together on 30th April, 2018 in New Delhi.

Apparently it was Deities 9th Anniversary but it was actually our 9th Anniversary… completion of our journey of 9 blissful years since Deities appeared before us in 2009. They have descended to purify our existence by accepting our services.. to purify our eyes by Their Darçana and Reciprocation, to purify our ears by making us hear the jingling of Rädhäräné’s Anklebells… and we all can witness that.. Yes !! It may be unbelievable but it’s true.

The Deities, the Sevit Vigraha of our revered Çré Gurudeva, are aptly called as Lélä-dhäré. Right from the time of Their Descent, They are performing Léläs. In 2009, Tithi wise The Deities were to appear on Nåsiàha Caturdaçé though Çré Gurudeva anticipating Their Appearance Day Celebration be a grand affair, feasting day in future, desired non-fasting day for Their Descent. Thus, the Deities Reciprocated.. when Çré Gurudeva went to receive Them on that day, The Deities disappeared and Çré Bäbäjé Mahäräja (the Spiritual Master of Çré Gurudeva) Asked Çré Gurudeva to come the very next day to take The Deities. Every now and then, They perform varied Pastimes.

They accept offerings leaving behind bite marks; They sweat when feeling hot; They leave food remnants in water offered. They are one but share individual relation with everyone.

Every year KARM Devotees take this opportunity to celebrate Their Appearance, Their Presence and Their Love for everyone.

For 2018 Anniversary Celebrations, like always Preparations started well in advance. Depicting the Merciful Descent of our Beloved Deities to make us Blossom into a bud (Maïjaré), Blossom was chosen as the theme of the Festival. 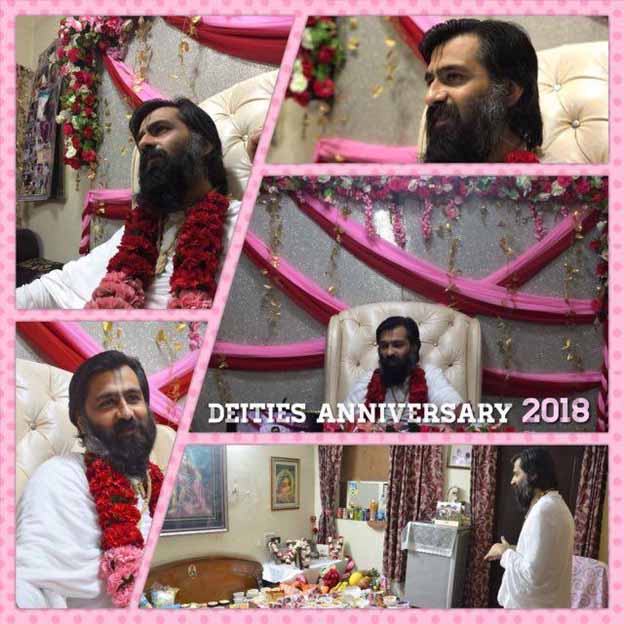 56-Bhoga List was increasing day by day.. crossing 1200 mark. It included any and almost every variety of eatables and drinks devotees could find in the market- ranging from 56 + 56 varieties of toffees to 56 kinds of sweets; 56 kinds of pakoòäs, paräëöhäs, rice; 56 kinds of muffins; 56 + 56 kinds of drinks; 56 kinds of biscuits, namkeens, wafers; different varieties of paräëöhäs, cooked vegetables and däls, halwäs; digestives etc. Even devotees’ friends, relatives, colleagues also sent Bhoga for the Deities.. Such is the attraction of our All-Attractive Deities. 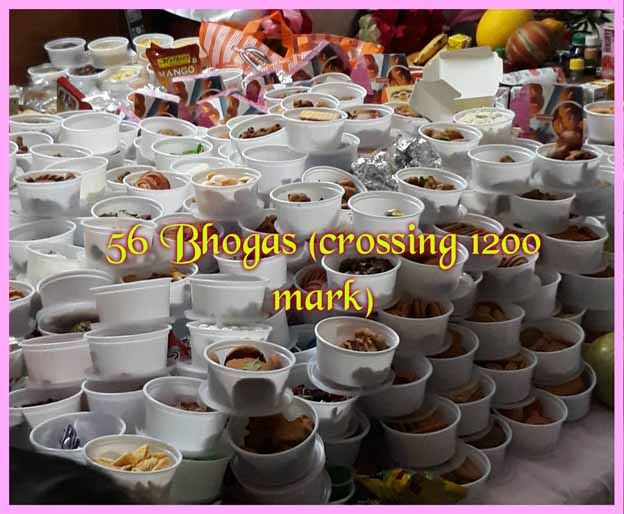 29th April was the Decoration Day.. Some devotees gathered at the Venue to give it the Blossom Theme while some gathered at other place to make 2-tier Cake. It was a fasting day.. fasting for Nåsiàha Caturdaçé but the sumptuous prasädaà served throughout the day made it no less than a feasting day.. Moreover, the Prasädaà was cooked by those devotees who were not even the part of Decoration/Cake making Sevä… Such selflessness is the base of Çré Gurudeva’s Teachings.

The festival was scheduled to begin on 30th April at 1.45pm but enthusiastic devotees reached the venue much before that.. with cars full of Bhogas and Gifts (for serving devotees).

Some devotees began to arrange Bhogas for offering… 10, 15, 20, 30, 45 minutes were passed, still arranging of bhogas was not completed.. there were many bags of bhogas which were lying unopened..

Soon after, the Deities and Çré Gurudeva made Their Merciful Appearance and the real celebration started. The celebration began with the offering of 1200 + Bhogas to the Deities by Çré Gurudeva… KARM Devotees witnessed the loving exchanges of Çré Gurudeva with the Deities! Alongside Gaura Gaura and Rädhä Kåñëa Kértanas were being enthusiastically sung by the Devotees. 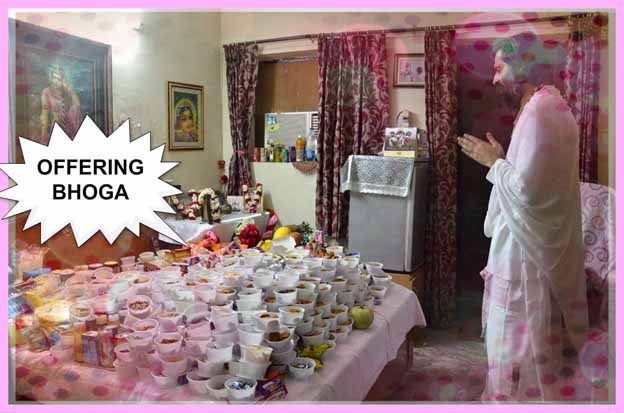 The most blessed moment came as Çré Gurudeva started melodious Maìgläcaraëa followed by Hari Kathä. Beginning with the beautiful description of how sakhés and maïjarés do the nectarine Darçana of Çré Yugala, Çré Gurudeva Elaborated on what actually Happiness is and how can one attain it- by having the feeling of ‘mine-ness’. How important it is to get rid of the feeling of being a female/a male/ a housewife etc. and to live life unattached- was also explained. The discourse was studded with the gems in the form of padya-gäna by Çré Gurudeva. 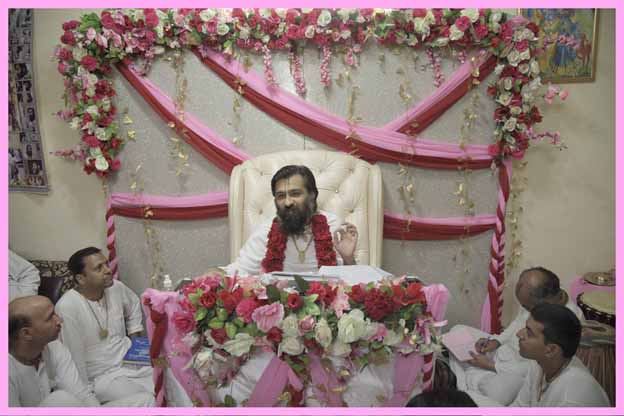 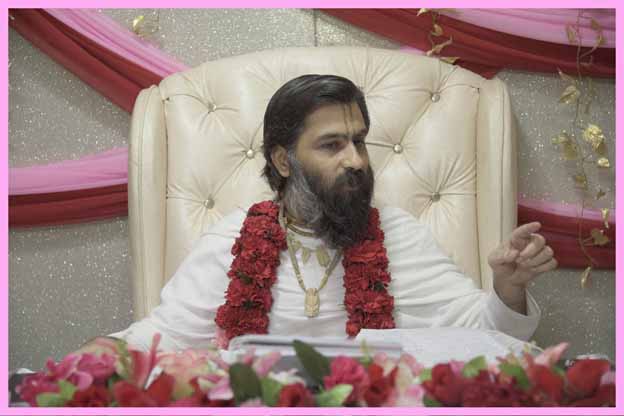 This was followed by Cutting of heartily made 2-tier Cream Cake. Offerings were then done by the Devotees to Çré Gurudeva and to each other, exemplifying once again Çréla Rüpa Gosvämé’s Instruction dadäti pratigåhëäti. 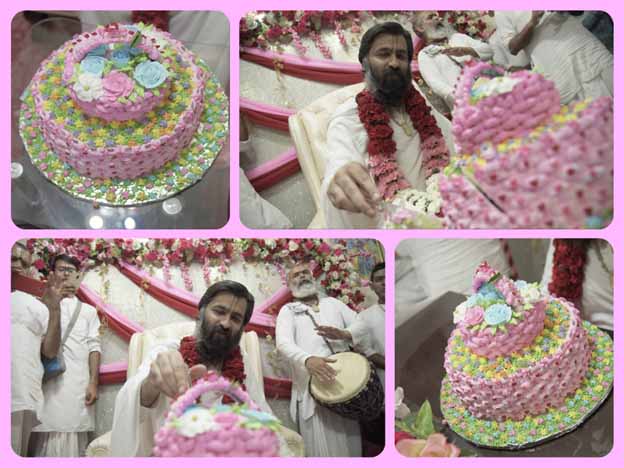 The gifts served by devotees were of different varieties.. each one exclusive in its own respect… from the mere packing, one could make out how heartily it has been served.. It was Deities Anniversary, gifts were served for everyone’s Deities in the form of Païca-dépa and single dépa by Devotee sisters and a small kaöoré and agarbatté stand by another devotee. To assist in beating the summer heat, a devotee couple served crates of buttermilk to each family while another devotee couple served Aam-panna. Further to make Devotees hydrated, packets of tang were served by a devotee while another devotee served very beautiful Milton bottles. Not just almonds but black currant flavoured almonds boxes, not just mere cashews but very good quality cashews were served by devotees. Fortified with Vitamin A, D and E, Devotee sisters served flavoured milk bottles. One devotee served green tea boxes to all while another served a Pouch full of coloured pens to be used by devotees in their services. 1kg of Ghee was the heart-filled offering of a devotee to all for His Dékñä Anniversary. Taking care of devotees’ health, while one devotee served microwave safe bowls, another served rice and a couple devotee served food wrapping roll, a replacement to aluminium foil. Gifts of exclusive tooti-fruti cake and colorful wafers was the treat to Deities. Very thoughtful offering of sky bags was made by one devotee while another served liquid handwash bottles, etc. 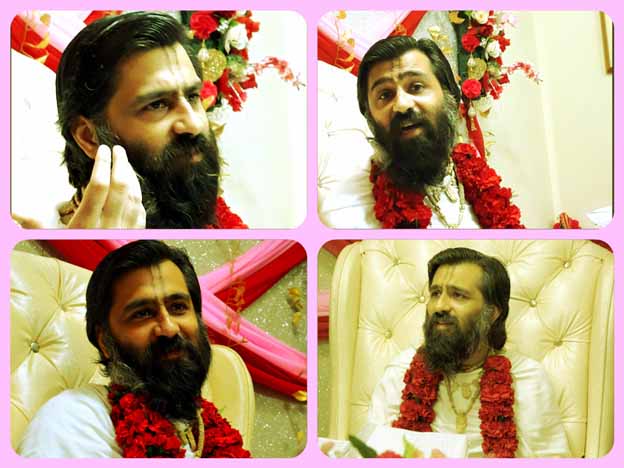 Then it was the feasting of prasädaà, which was too much.. both in quality and quantity..  it had snacks, it had main meal.. it had desserts, it had drinks.. everything was lovingly made and served.

At last, to everyone’s surprise, Çré Gurudeva personally blessed a devotee with HIS Prasädé Garland which left not only that blessed devotee but everyone present there completely ecstatic, mesmerised and blissful.. Such is the beauty and culture of oneness in Çré Gurudeva’s KARM Family where everyone is blissful in everyone’s happiness. And then Çré Gurudeva left, the celebration came to an end leaving behind beautiful and blissful memories for lifetime.