142 Km from Sealdah station (approximately 3hours) and 83 km (approximately 2 hour)  from the Vardhman station, on the banks of river Gangä (known as Hooghly ) is situated the transcendental abode of Lord Gaura in the Nadia district of West Bengal in India.

Just as Lord Gauräìga is considered the most hidden and confidential incarnation of the Lord, so are the Places of His Pastimes and Appearance, remaining aloof from most of the people, including those chanting Hare Kåñëa.

Mäyäpur -the celebrated Birth Place of our beloved Gaura is situated on the eastern side of the river Ganges, which is commonly known as Präcéna Mäyäpur. The divine town is adorned with the footdust of Gauräìga and His Various Associates, with whom He performed sankirtana yajïa and other confidential pastimes. 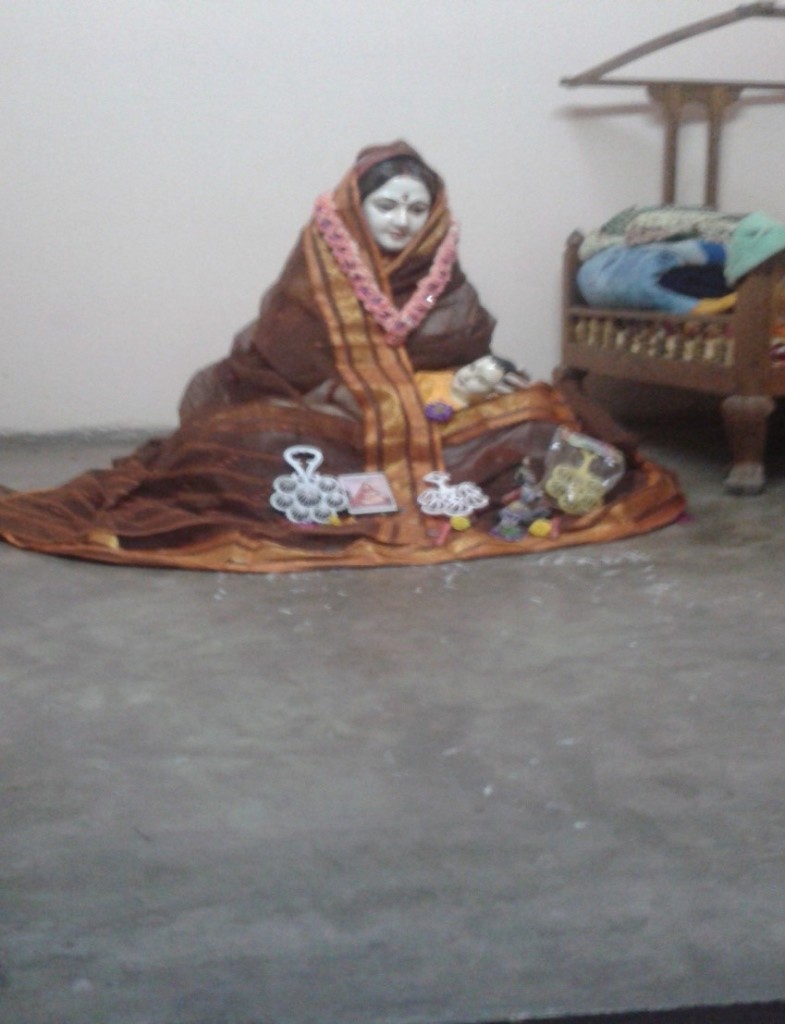 At Gauräìga Mahäprabhu’s Birth place, there is a Temple having the Deity of Çaché Mätä holding son Nimäé in Her Lap. Behind the Deity, is the Néma Tree, under which Lord Gauräìga actually appeared, tied with sacred threads all over. 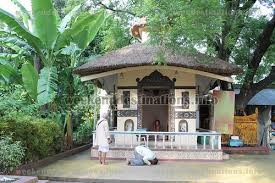 There are huge Deities of Rädhä Kåñëa and Nitäé Gaura as well, in the marble erected structure. The divine aura of the Place explains the rest.

It has a big hall where the Lord performs His Night pastimes of congregational chanting with His most intimate Associates. 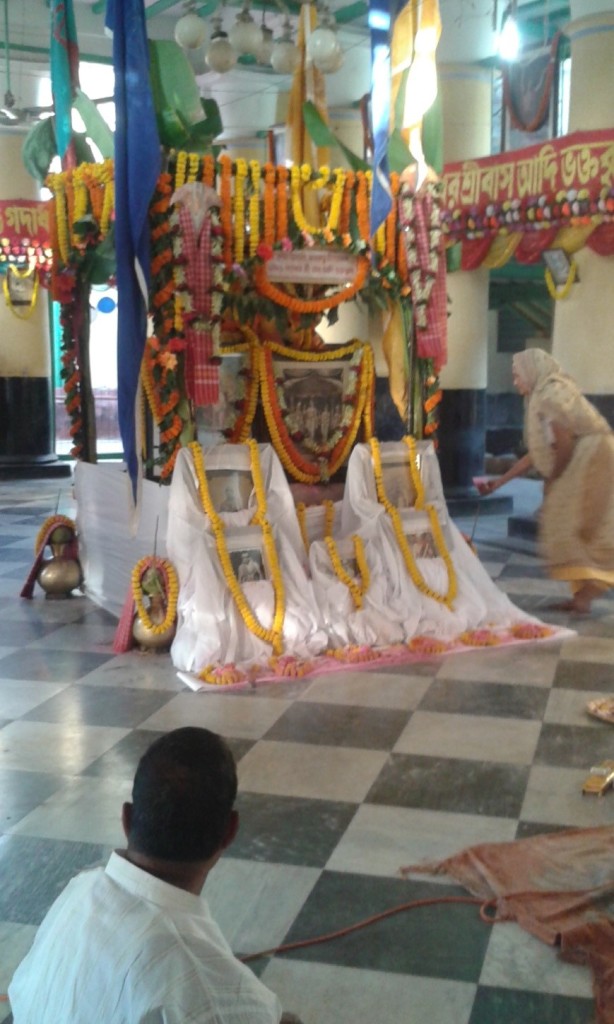 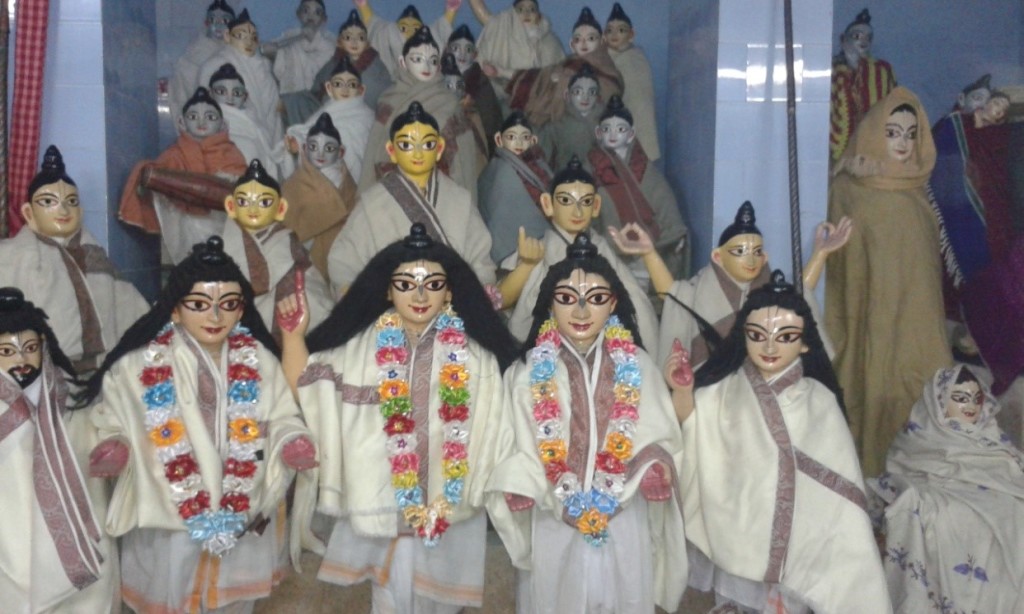 Also in Çréväsäìgana is a peculiar berry (Indian Jujube) tree.  This tree was blessed with Mahäprabhu’s grace which turned immediately from a shrub into a grown up tree. The tree has survived more than 500 years, still standing upright, spreading its green branches in the sky despite having hollow trunk! The mere sight of the tree fills devotees’ heart with awe and love for Gaurasundara’s Grace. 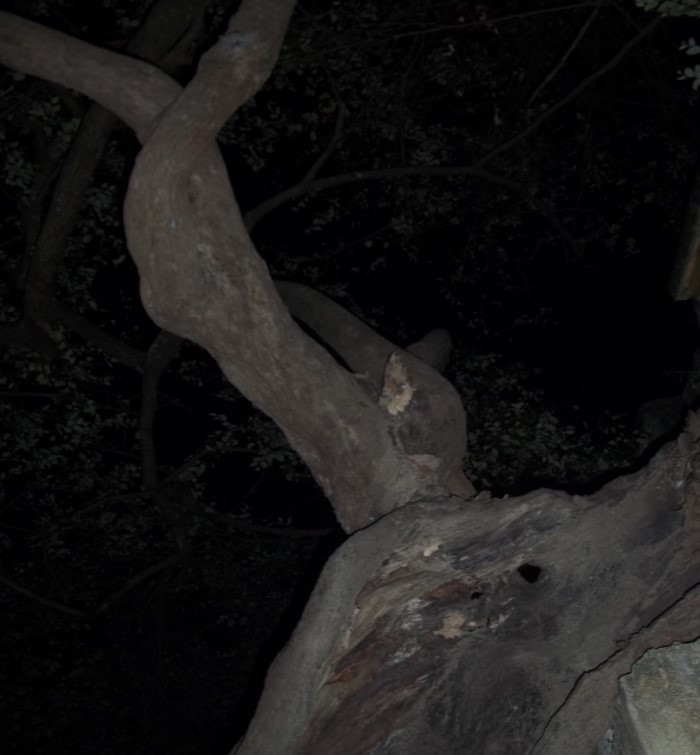 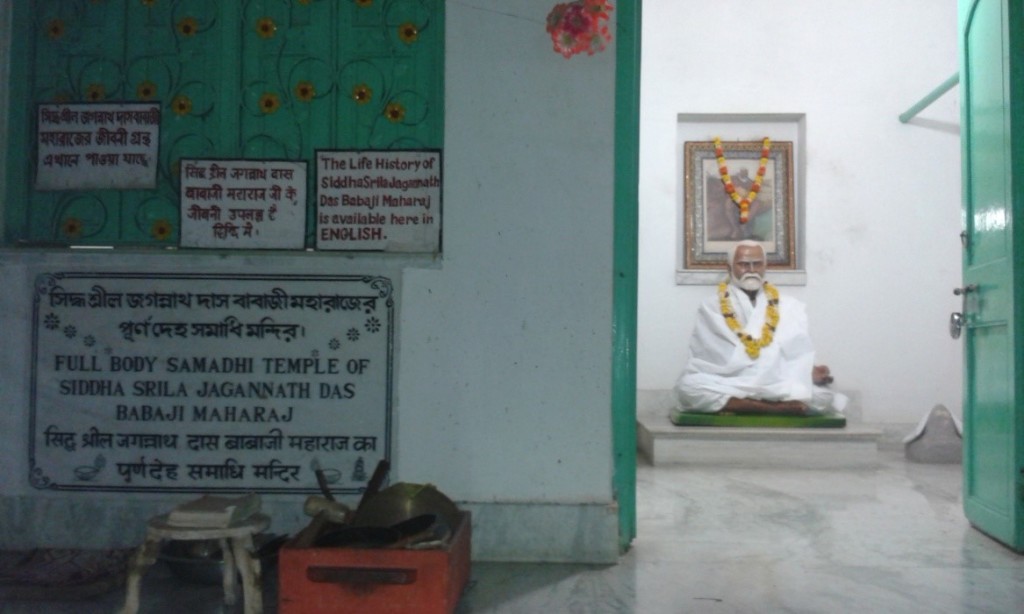 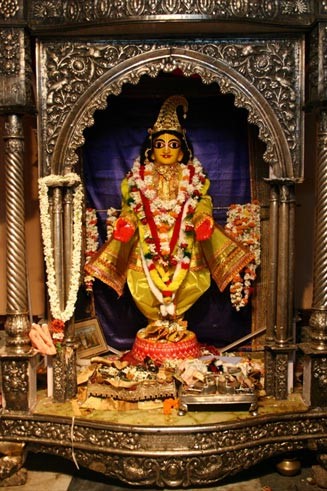 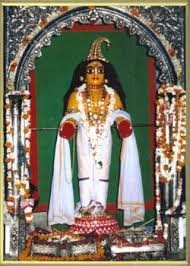 Lord Gauräìga’s Appearance, known as Gaura Pürëimä is celebrated in the month of Feb-March every year at His celebrated Birthplace Mäyäpur. 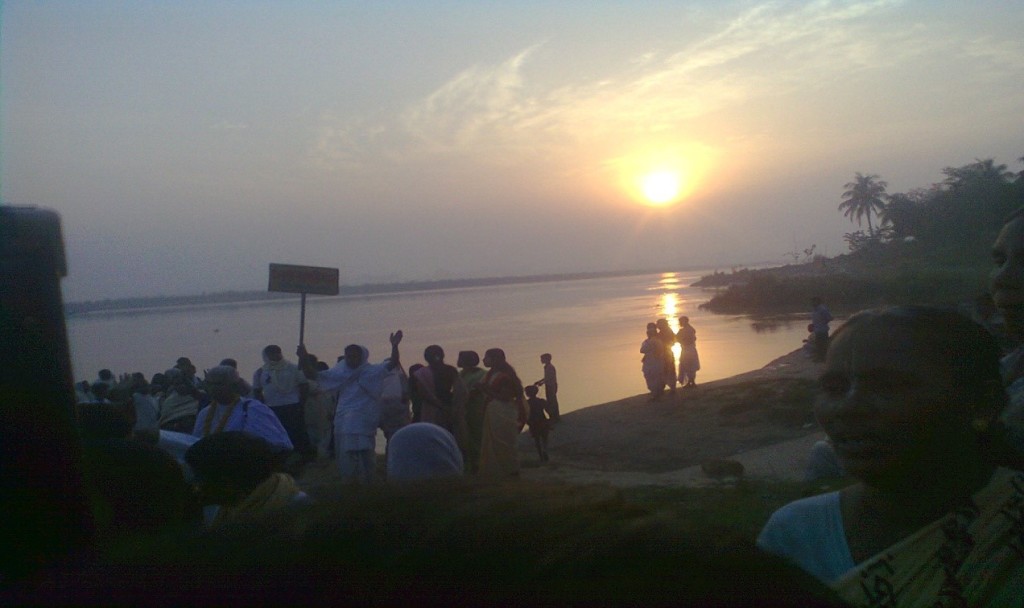 The Navadvépa Dhäma Parikramä begins in a circular way at Nirdayé ghäta from where we travel across the Gangä  river to Antar dvépa. It is of 5 days duration and usually starts at 3-4am and finishes around noon.

Every dvépa has a very special spiritual significance associated with it, where the Lord had performed different pastimes. Some of them are entailed as under.

At Antardvépa, Çréman Gauräìga Mahäprabhu manifested before Lord Brahmä who had performed austerities on this Dvépa as a penance for the atonement of the offence he committed unto the Lotus feet of Lord Kåñëa, of stealing His calves and the cowherd friends.

After expressing his desires to be bestowed unwavering devotion unto Lord’s Names and His Lotusfeet, Brahmä expressed his inquisitiveness to know the innermost reasons for the Lord to take the molten gold complexioned form as Çré Gauräìga Mahäprabhu, upon which, the Lord expressed His innermost feelings and desires to describe the reason why He accepted this form-

“To understand the greatness of Rädhä’s love, the happiness She feels when She realizes the sweetness of Mine, and the wonderful qualities that She alone relishes in Me.”

This is why this dvépa is known as Antar dvépa. Antar- inside, where the Lord expressed His innermost reason for His descent.

At Rudra dvépa, Lord Rudra (Çiva), taking shelter of the holy names, began sankirtana yajïa much before the advent of Gauräìga Mahäprabhu. The Lord gave Him Darçana and promised to bestow upon Him entrance to the Rasa pastime of Sankirtan Yajïa that he was denied earlier in dvapara yuga.

The Lord told Rudra deva that the sankirtana yajïa sees no qualifications of the candidate, and that it is for everyone.

At this Dvépa, Goddess Pärvaté (Gauri), the consort of Lord Çiva performed sankirtana, to be blessed with Lord Gauräìga’s Darçana, and ask for the atonement of the offence committed against a Vaiñëava.

The Lord manifested before her and explained her the glories of unflinching devotion and allegiance of a devotee towards his Çré Guru and The Lord. Goddess Pärvaté expressed her devotion by adorning her hair partition with the holy dust of this place. 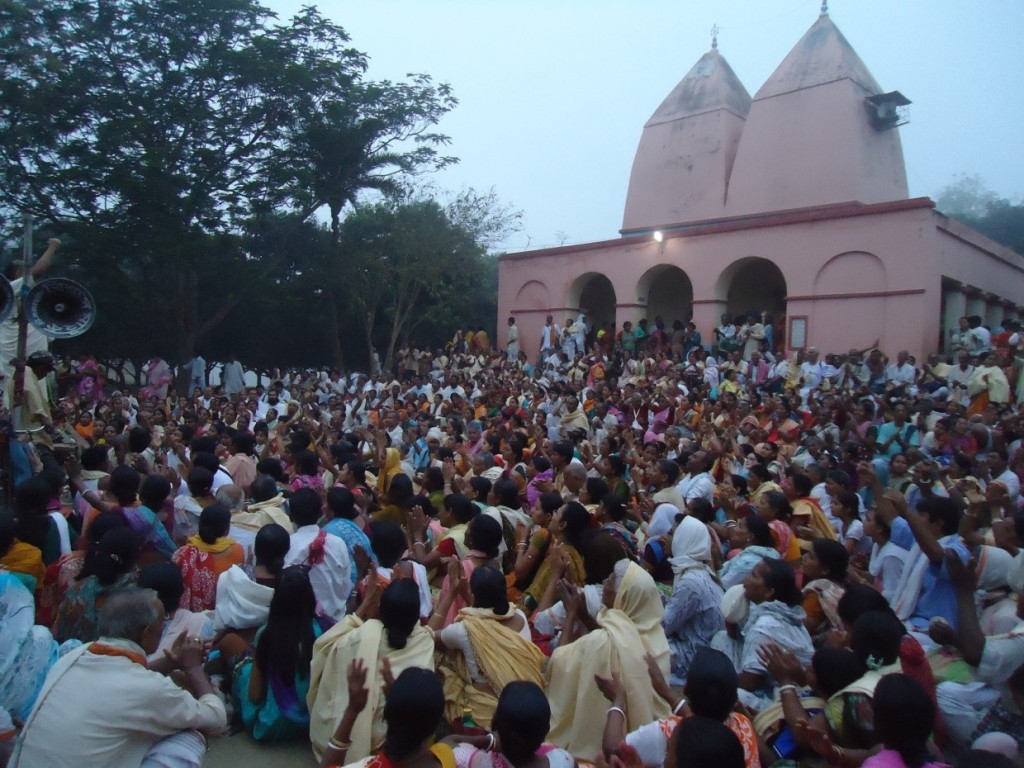 The six seasons serve Rädhä Kåñëa eternally in Goloka. When Lord Kåñëa culminated His Pastimes on the planet, the six seasons personified being aggrieved began sankirtana yajïa. The Lord Caitanya appeared before them and assured them that He would appear in the form of Gauräìga  to bless them with His service. Later, in the house of a Brähmaë, who used to offer white campä flowers to Deities Madana Gopäla, The Deities assumed white complexion. And from there, the place came to be known as Campahatta. 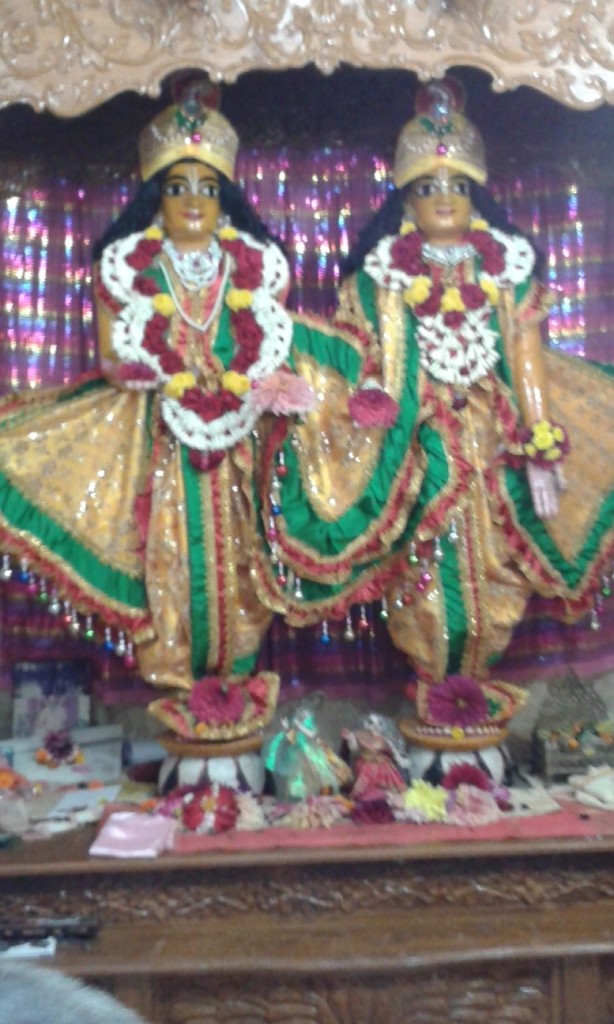 The place came to be known so, after the name of the Saint Jähnu Muni, who had drunk the Gangä River and later realising his mistake, released the river from his knees. Thus, Gangä came to be known as Jähnvé there. The Saint got transcendental feelings at this place, he realised that at this place, the Lord will manifest Himself as molten Gold complexion Gauräìga Mahäprabhu .

During Dväparayuga, Indra along with Surabhi cow worshipped Lord Gauräìga, as a result of which Lord Gauräìga gave darçan to both, and blessed them with His service when He will appear in the age of kaliyuga. Because Surabhi cow is staying here under a banyan tree hence this island is called as Godrum dvépa.

Within the entire three worlds, there is no place comparable to Godruma. It is the forest in which the great sage Markandeya received the mercy of Lord Gaura.

This place is called Madhya òvépa because Lord Gauräìga appeared in front of Sapta åñis during midday and looked as brilliant as the midday sun.

Here in Modadruma òvépa is Ayodhyä. In a previous kalpa, when Lord Rämacandra was banished to the forest, He came to this place with Lakñmaëa and Jänaké. He built a hut under a huge banyan tree here, and lived happily for some time.

At this place, the Lord appeared to His devotee in the form of a boar, therefore it is described in the scriptures as Kolu òvépa.

The description of the divine places at Navadvépa and Mäyäpur is not exhaustive.

The sweetness of the pastimes of the Lord can still be experienced by the Self-realised souls here.